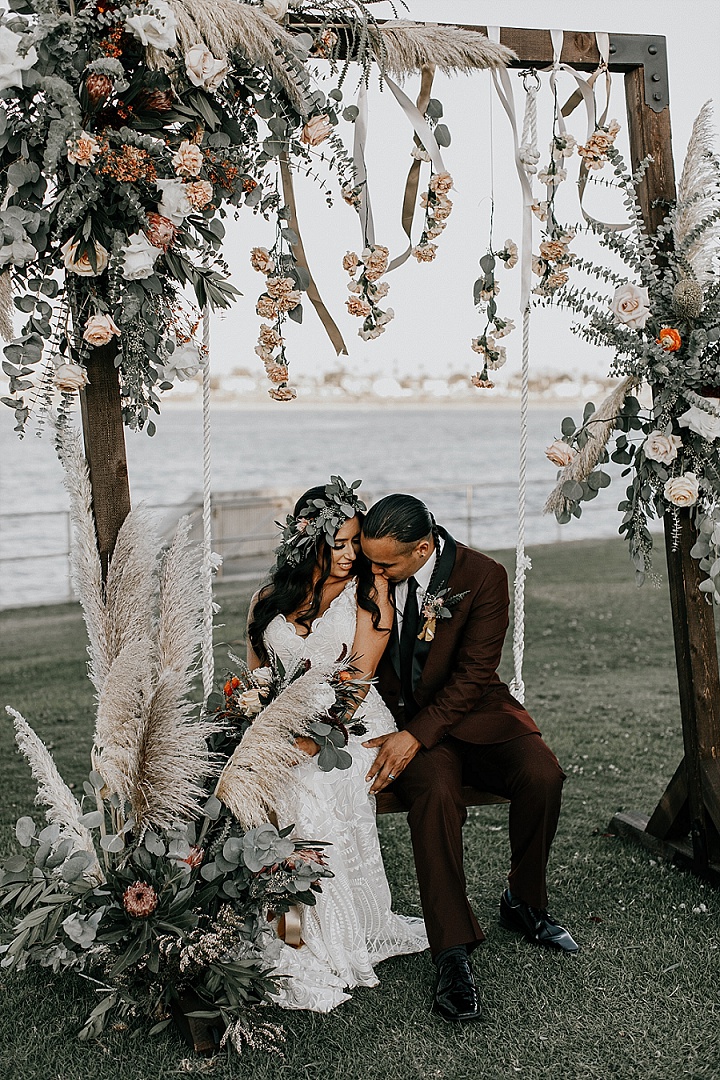 This San Diego wedding is absolutely stunning. The flowers are incredible, so full of boho goodness and earthy tones. Thomas and Ariana also incorporated some of their Native American culture by having a Pendleton blanket in their ceremony.

Thomas knew from the beginning that he wanted to have an all burgundy tux for the wedding. The inspiration for the wedding day was a mix of the bride’s and groom’s styles, earthy tones and colors and a lot of greenery. The bride is full Mexican American and the groom is Cahuilla and Mexican and they incorporated some Native American cultural aspects. Thomas also sang “bird songs” with his bird singing group, while the men sing, women stand across from them and dance.

The location was a small, simple yet beautiful one. With nice views of the harbor to grass and palm trees, there was not too much that the couple had to decorate. The ceremony decorations had one focus which was the big floral arbor. For the reception, the venue provided beautiful wood tables and greenery within the reception building. The flowers were mainly use to bring in lots of texture to the bouquets to make them appear sort of messy to create sort of a boho chic look. Pampas grass and other dried flowers/leaves added a sharp, almost pointy, texture also.

The bride was wearing a beautiful boho lace fitting wedding dress with spaghetti straps and a greenery crown. The groom was rocking a burgundy tux with black lapels. The bridesmaids were wearing mismatching maxi nude dresses, and the groomsmen were rocking black tuxes. 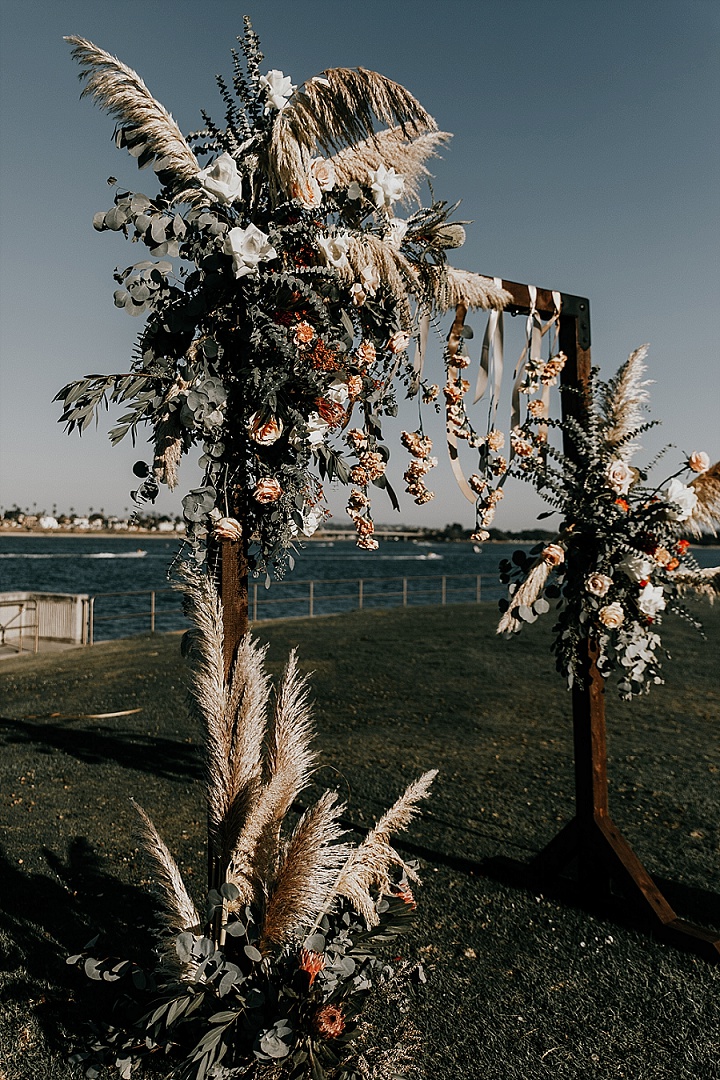 The wedding arch was done with pampas grass, neutral and pastel blooms, greenery and leaves 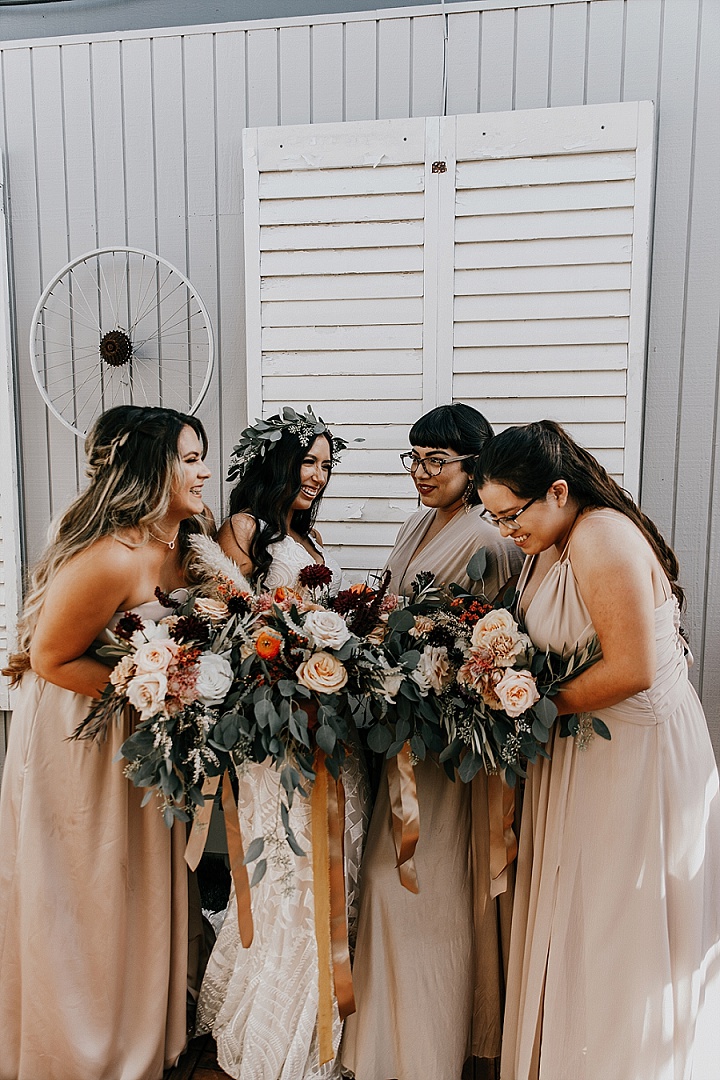 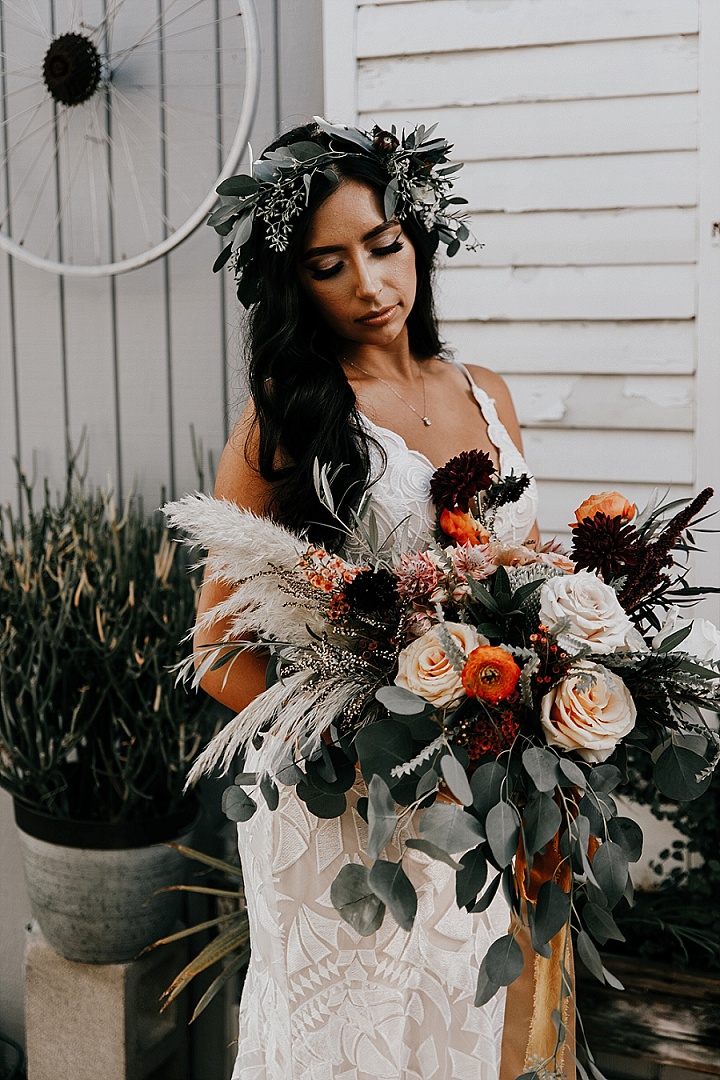 The wedding bouquet was done with neutral and bright blooms, eucalyptus and pampas grass 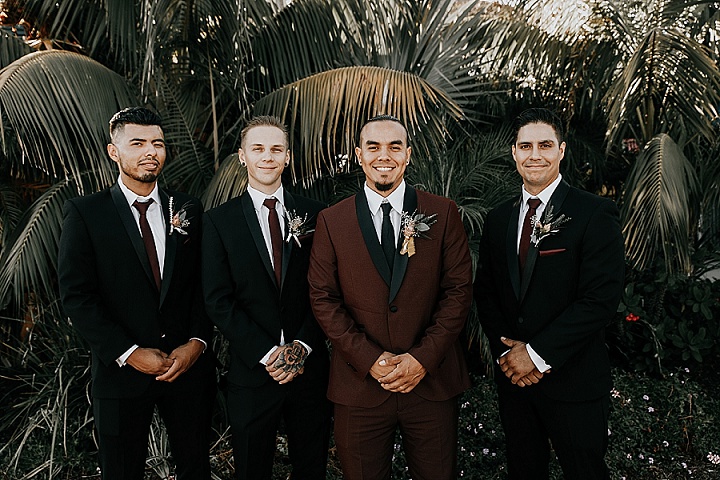 The groom was wearing a burgundy tux with black lapels, the groomsmen were rocking black suits 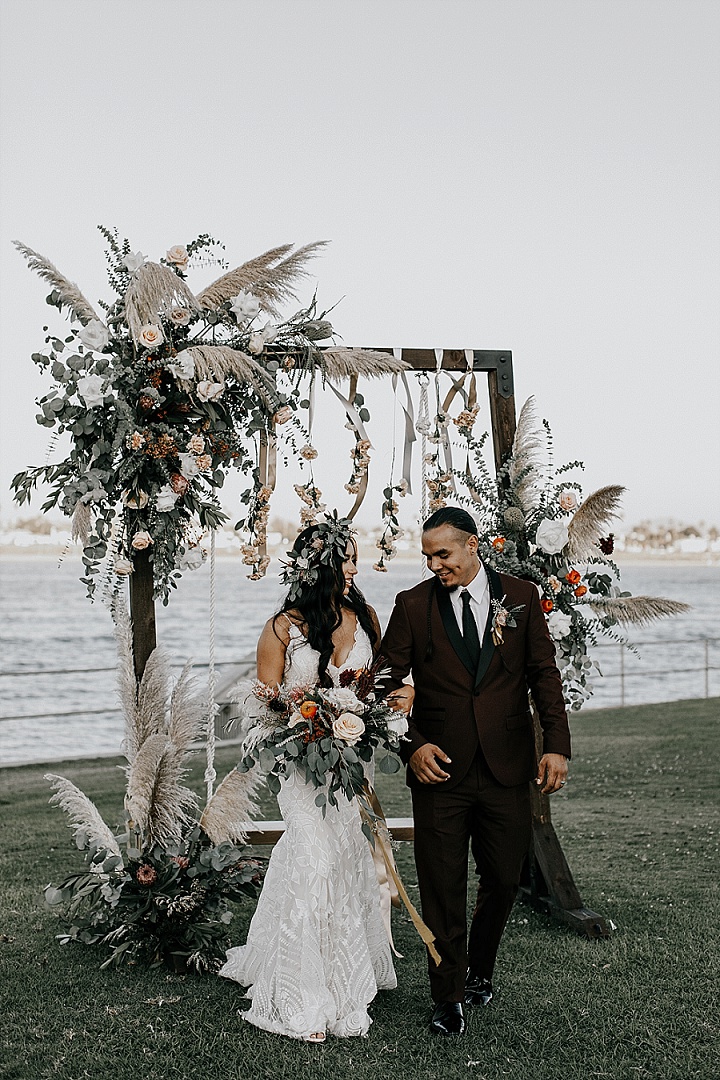 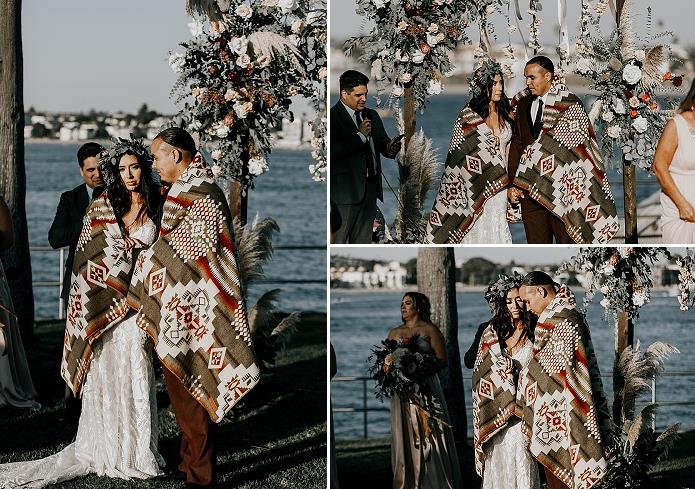 The wedding venue was done with greenery runners, neutral fabric and naked tables 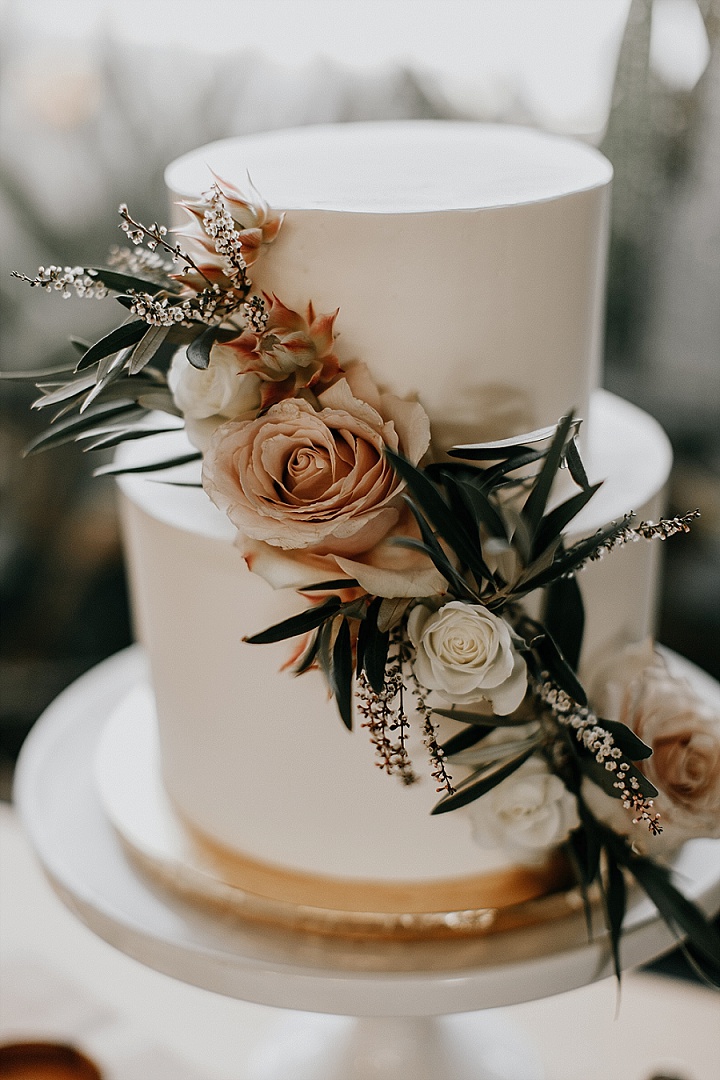 The wedding cake was a white one, with neutral and blush blooms and greenery 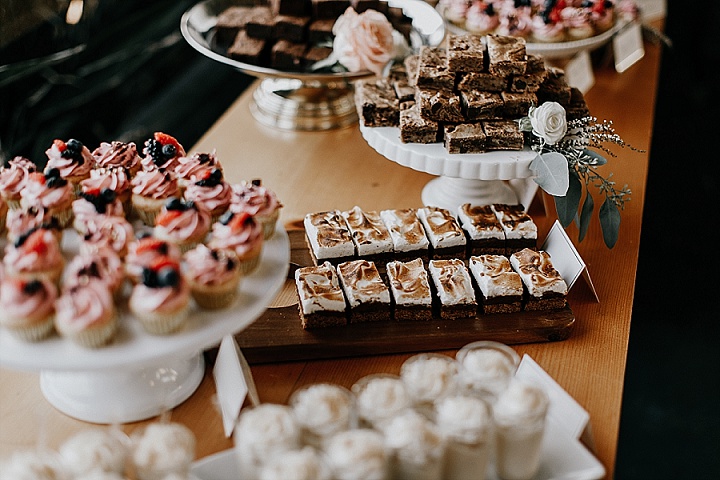 There were many delicious desserts served for the wedding 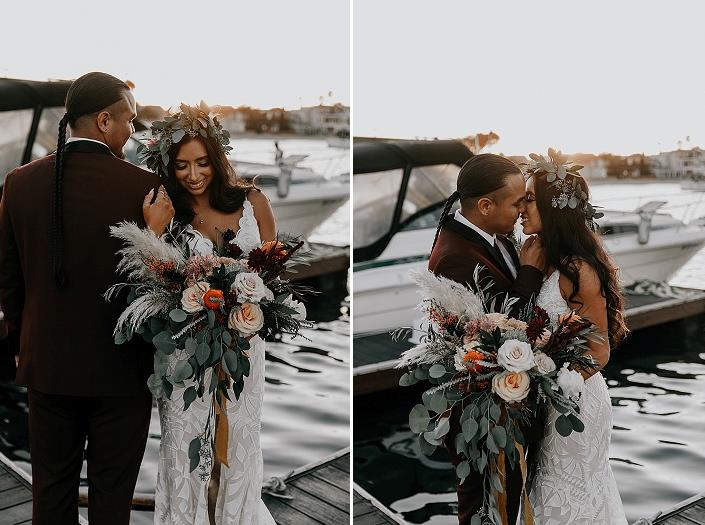 What a romantic wedding and what a gorgeous couple