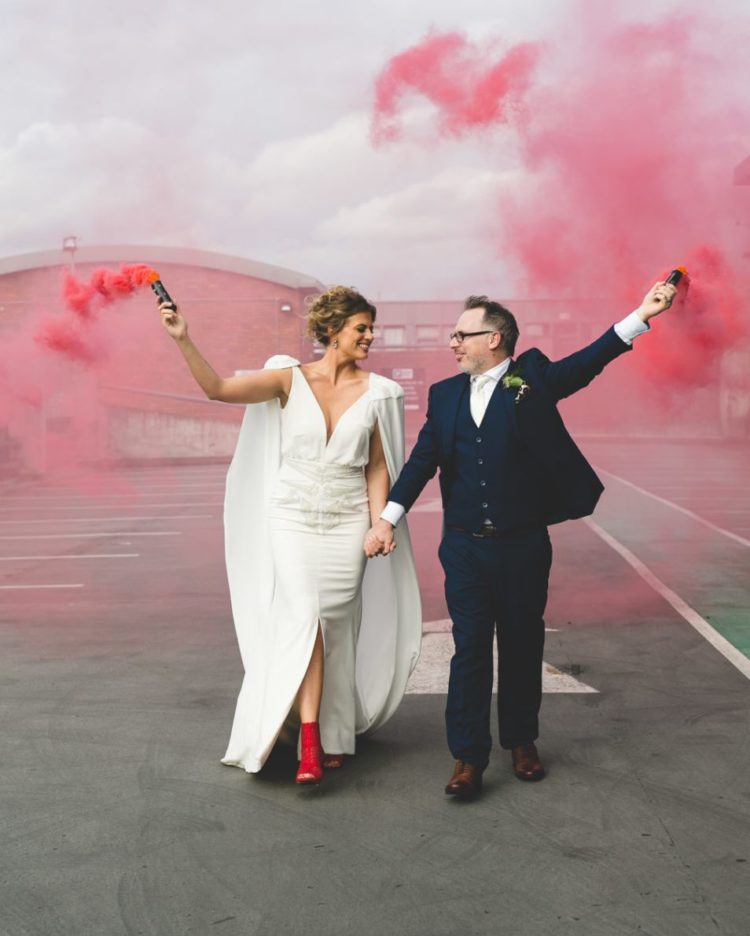 This couple had a long relationship and finally decided to tie the knot in Dublin, making a wedding with woodland and Burning Man touches

Holly and Ruairi had a cool wedding at The Chocolate Factory in Dublin; it was personal, creative, stylish, and it looked like loads and loads of fun. The pair created their vision of a Dublin city wedding with ‘a woodland Burning Man vibe’ – I can’t wait to share that all with you!

There were elements of Burning Man that held throughout, but inevitably the couple were flexible to the space and the decorators once we had a few conversations and established trust in taste. The decorator gave it a gorgeous natural woodland feel and the couple added in elements of neon lighting throughout. The ceremony was very personal as it was held by Holly’s twin sister, Della. Holly is half Czech so we also incorporated one of their traditions of smacking each other on the arse with pomlázkas, which probably seemed weird to some of the folks there but fun. The couple had a delayed start to their honeymoon but escaped to a little cottage without electricity in Donegal a couple weeks later.

The cape, the beading, the breathtaking backless-style; Holly’s incredible gown really nailed the ‘Burning Man glamour in the city’ vibe beautifully. She finished off her look with a messy and wavy updo and gorgeous red laser cut booties. Holly’s gorgeous minimal bouquet was in keeping with the woodland feel of the decor. The groom and groomsmen were wearing navy three-piece suits with different ties. The bridesmaids were rocking mismatching dresses and separates, with various shoes to show off the character and style of each of them. 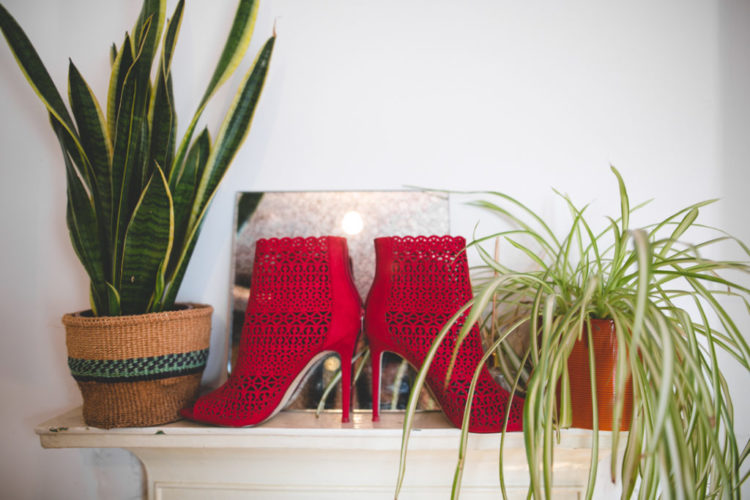 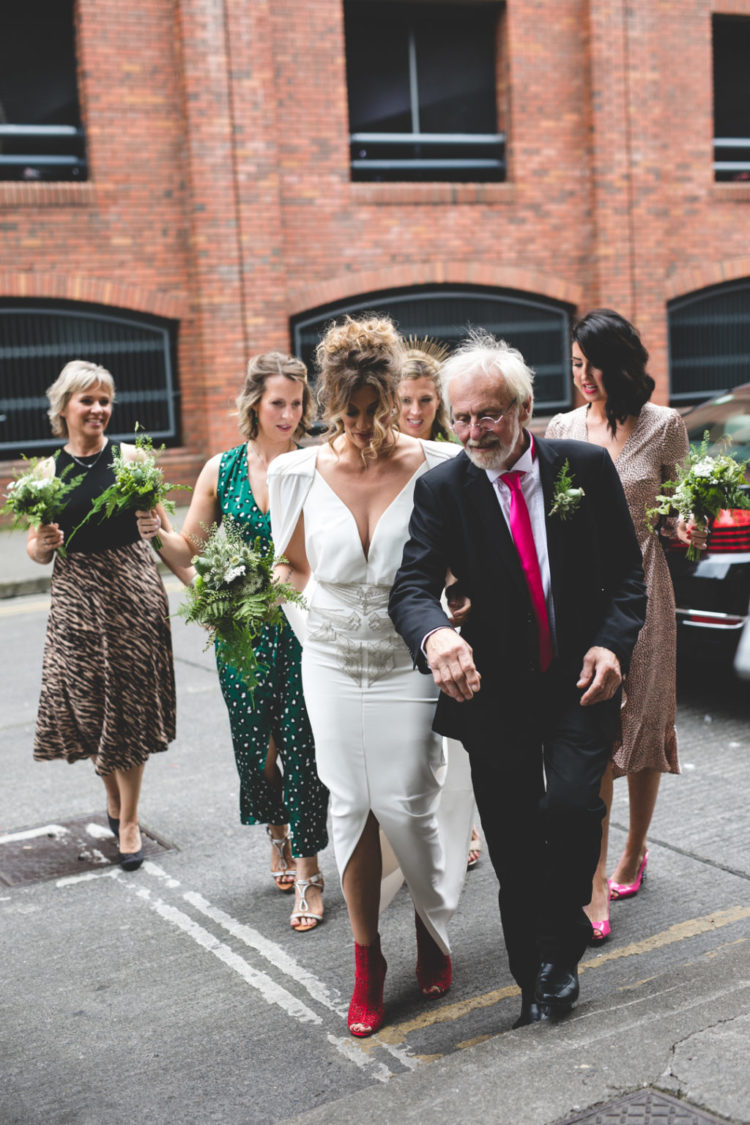 She was wearing a white fitting wedding dress with a plunging neckline, a front slit, an open back adn a cape 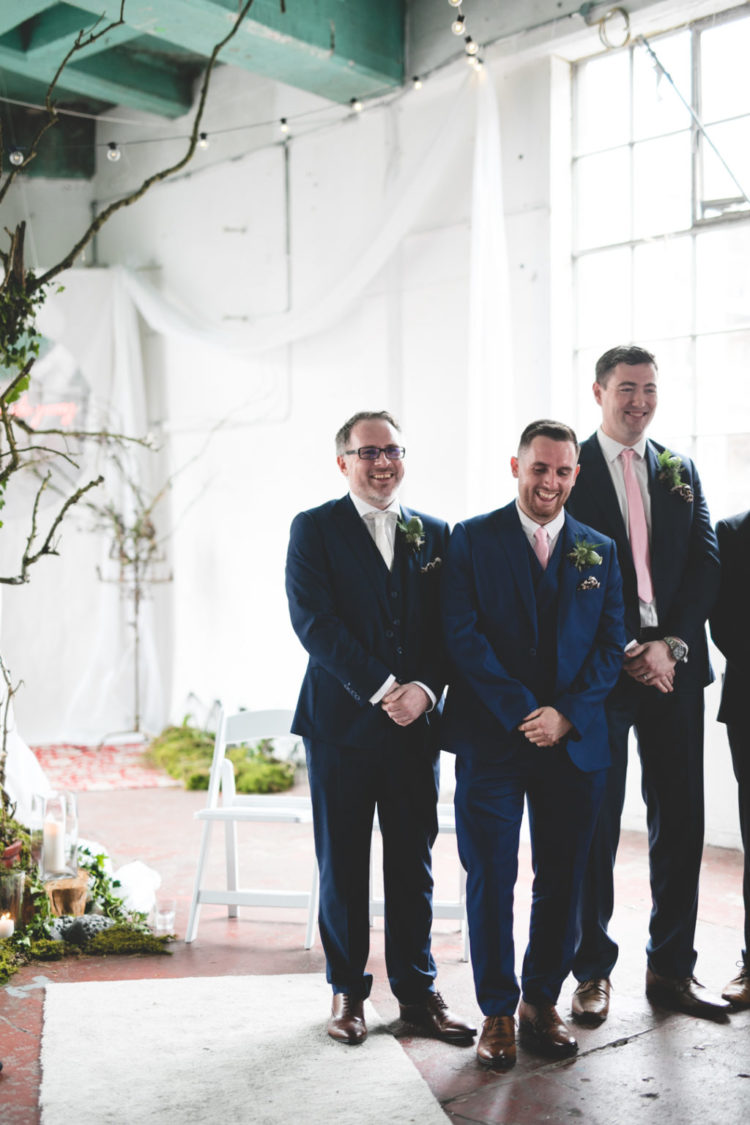 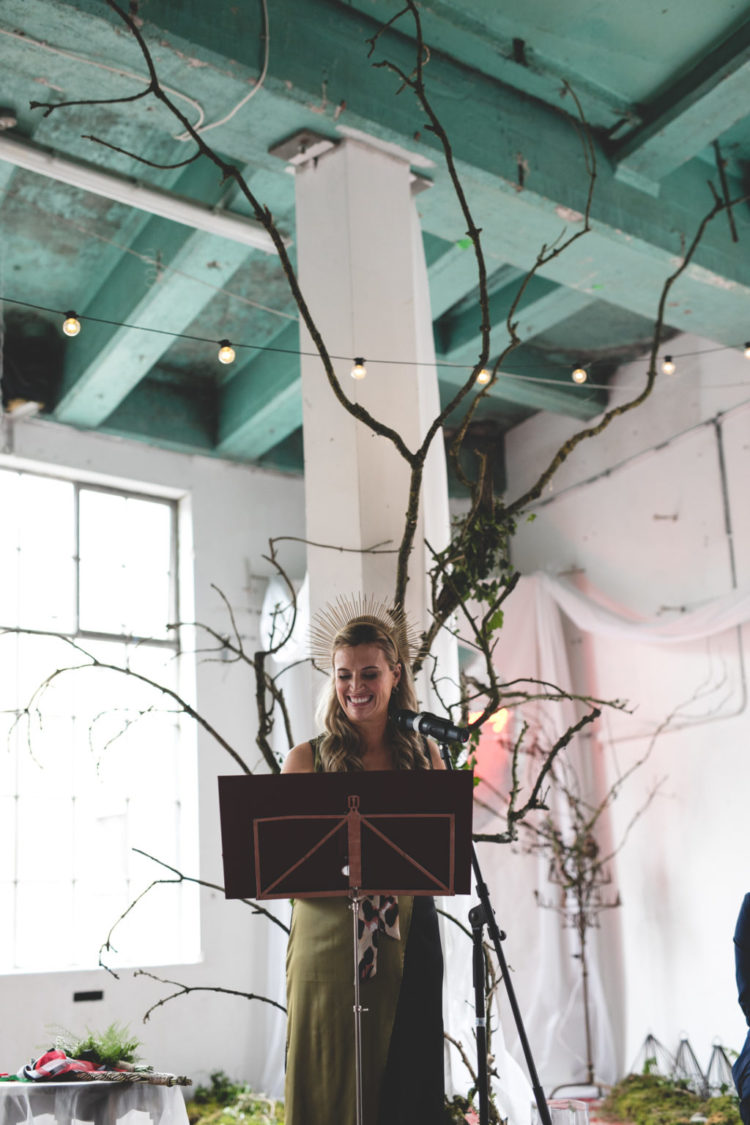 The officiant was the bride's twin sister Della, which gave a special feel to the ceremony 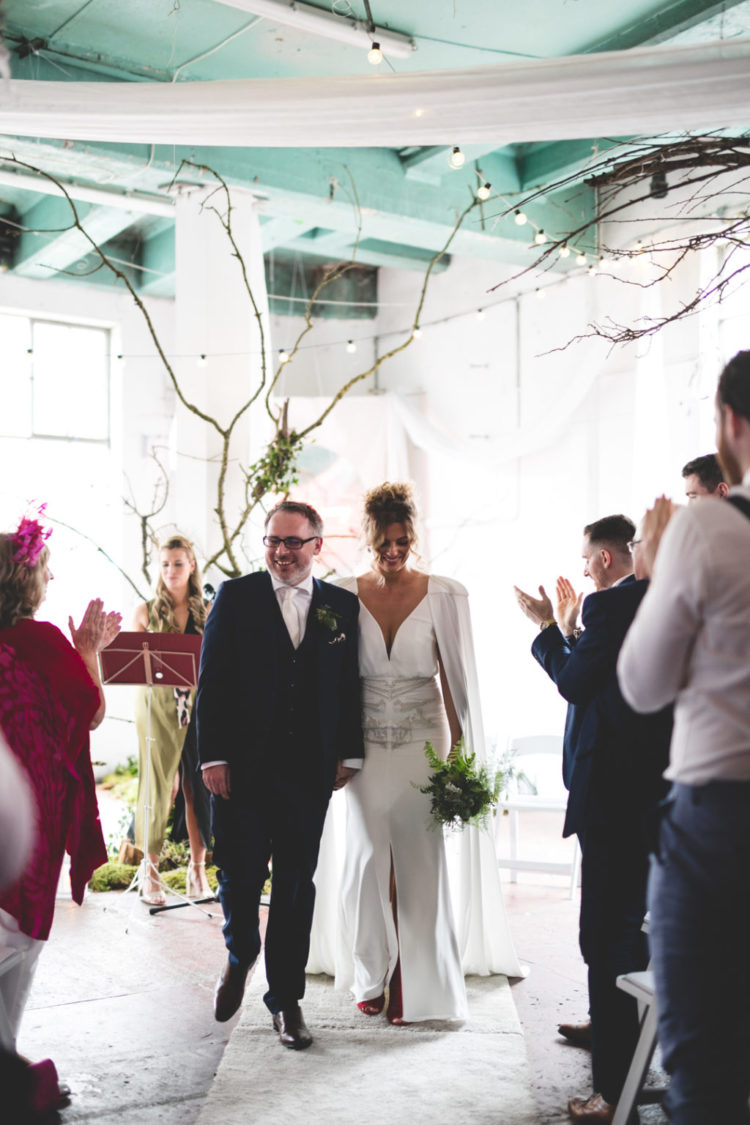 The wedding bouquet was composed of greenery and white blooms 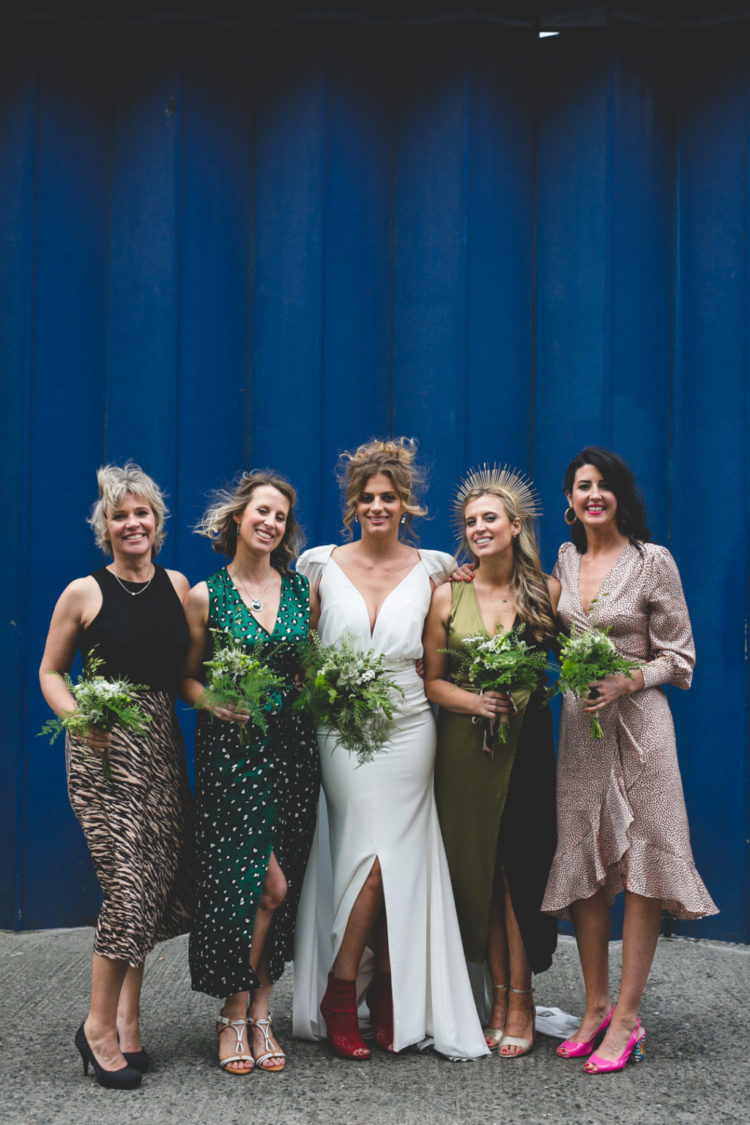 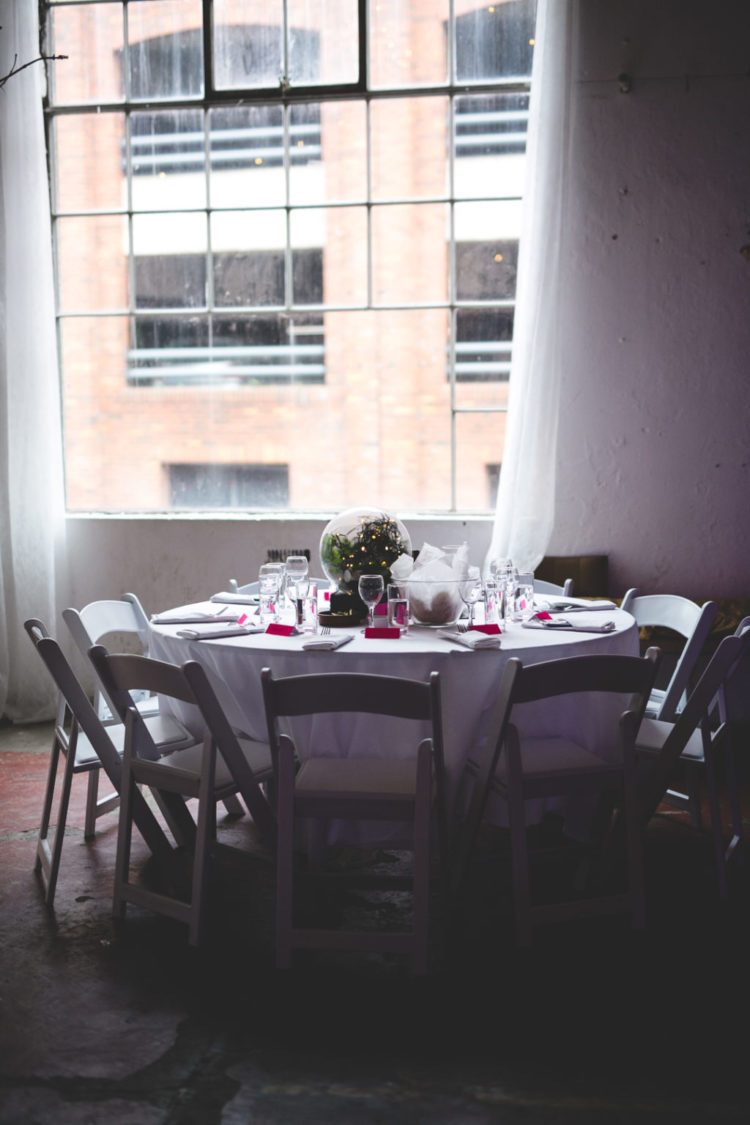 The wedding tables were done with greenery and lights, bright fuchsia touches 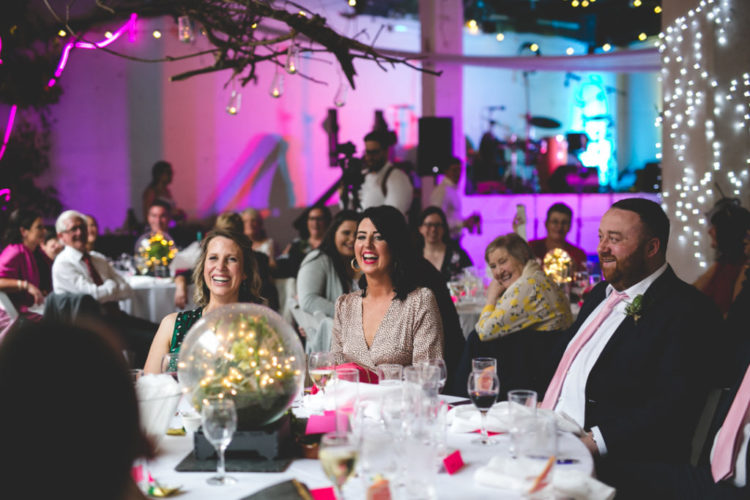