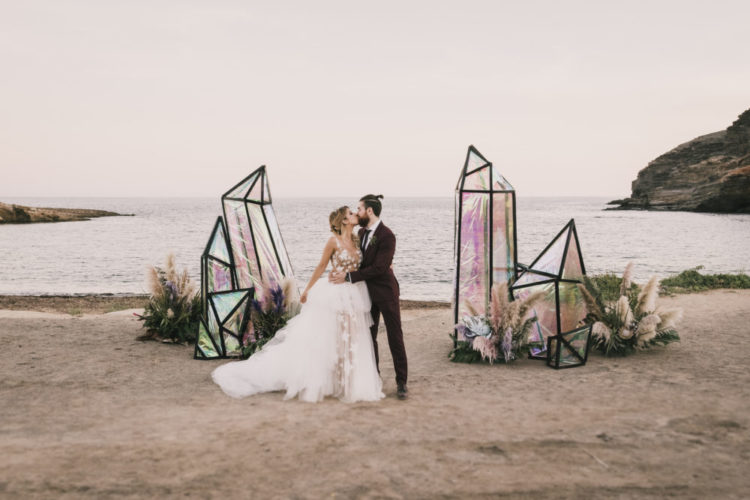 Laura and Paco’s Spanish beach wedding is one of a kind, this is definitely not what you expect to see. This couple are dancing to the beat of their own drum and we absolutely love it! The balloon arches, iridescent geodes, incredible stationery and party atmosphere mean this is a festival wedding we are excited about.

The couple wanted their guests to feel like a true festival. It was wonderful to mix everything they love, such as music, travel, gastronomy, design and share it with all the family and friends. The inspiration for the entire event was the work of the wedding organizer Lorena. The couple were his inspiration, their lifestyle, musical tastes, trips and festivals such as Tomorrowland, Sonar, Coachella, Fusión Festival and Burning Man.

The details of this Spanish beach wedding were totally unique, from the ceremony on the beach with the geometric structures to the graphic design created by the bride herself. Laura designed the invitations and menus, there were even scratch cards for a prize draw!

The bride’s modern peplum ballgown style dress for this beach extraganza was an exclusive design by Alejandro Resta. The amazing tulle and star applique frock was customized with an embroidered eye and heart by the Spanish designer.

The entrance to the dinner was really amazing when as they played the music, fired the confetti cannons and the co2 effect of the megatron. All the guests danced while they launched fake money with theoir printed faces shot with a gun pulled out of a briefcase. 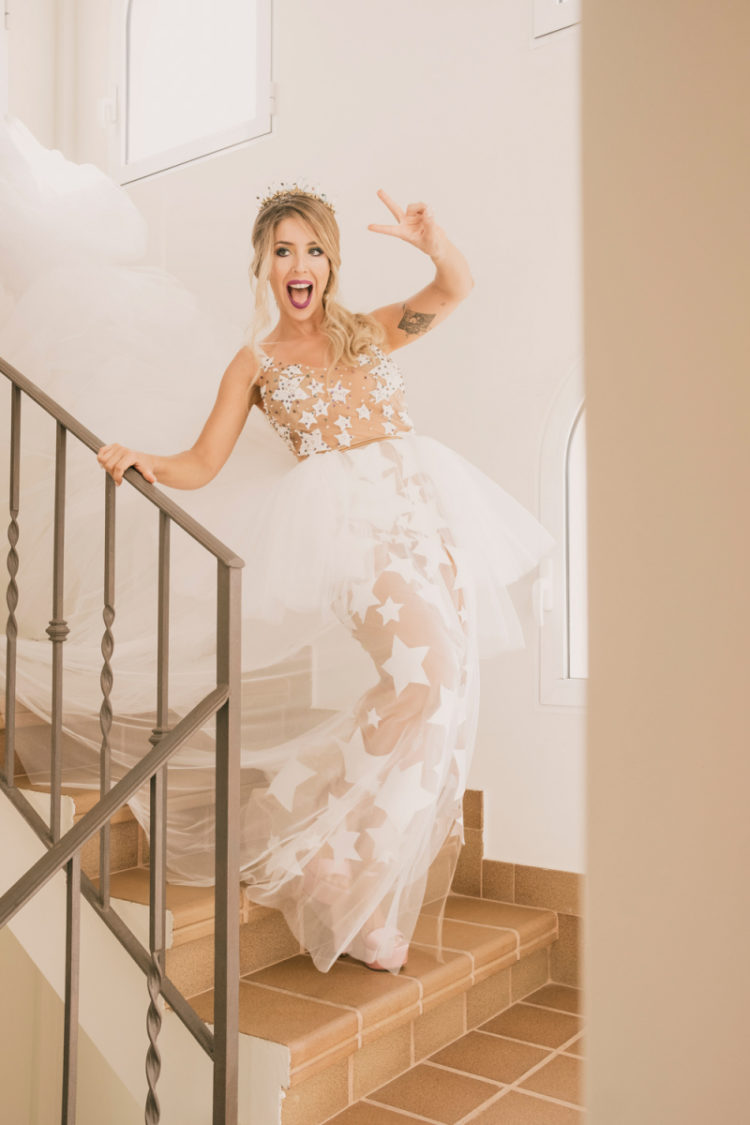 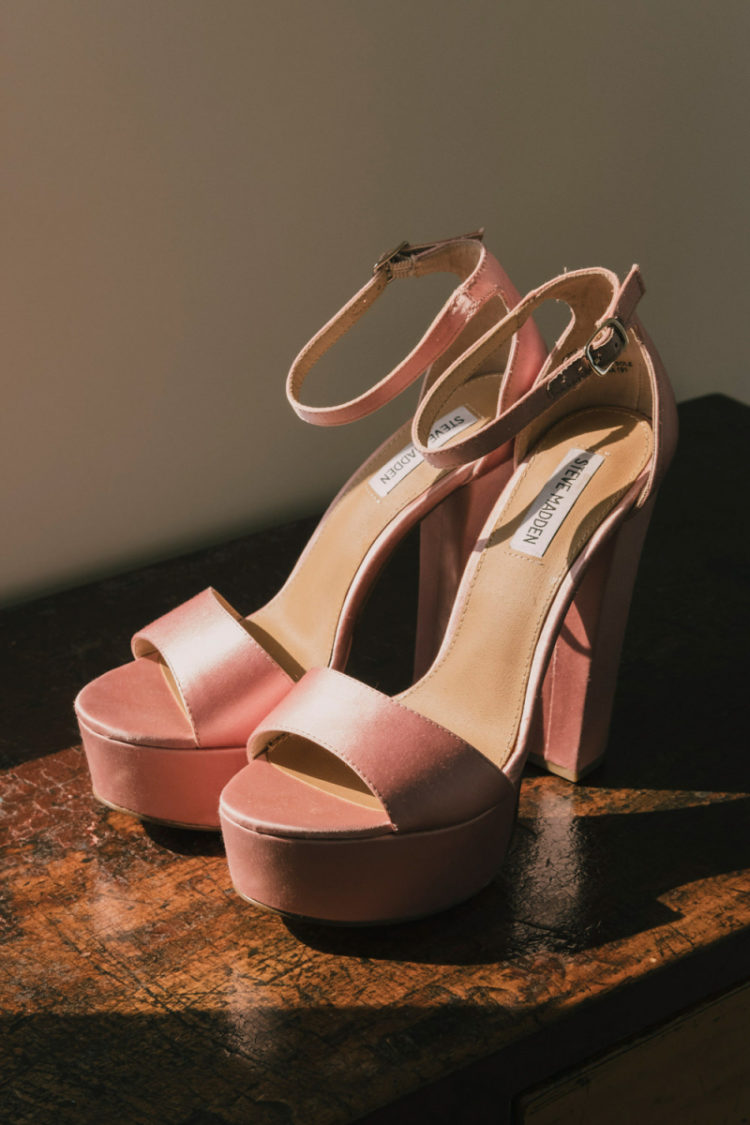 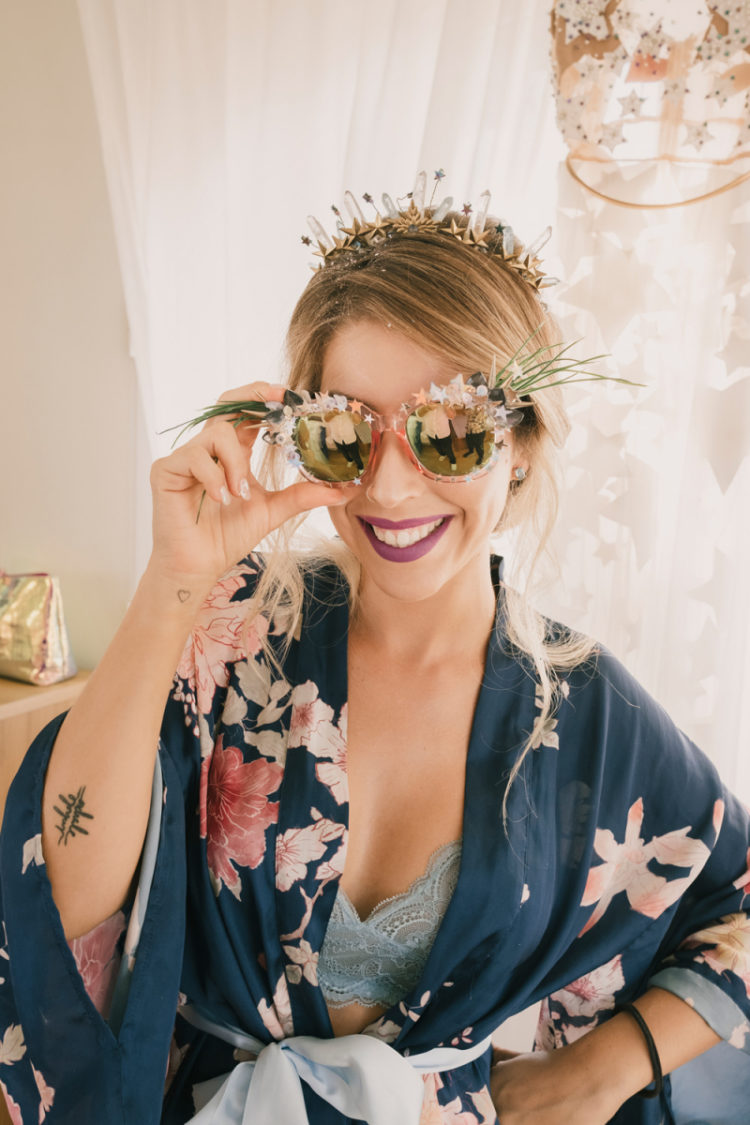 Her wedding look was finished with a crystal and star headpiece 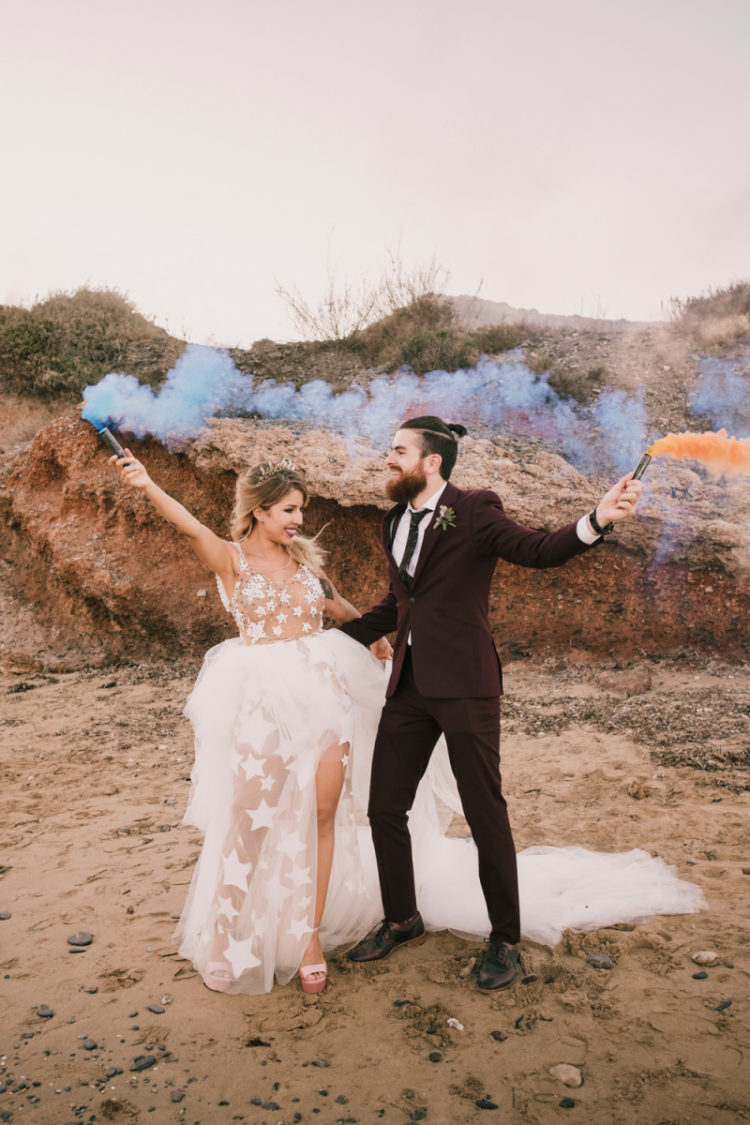 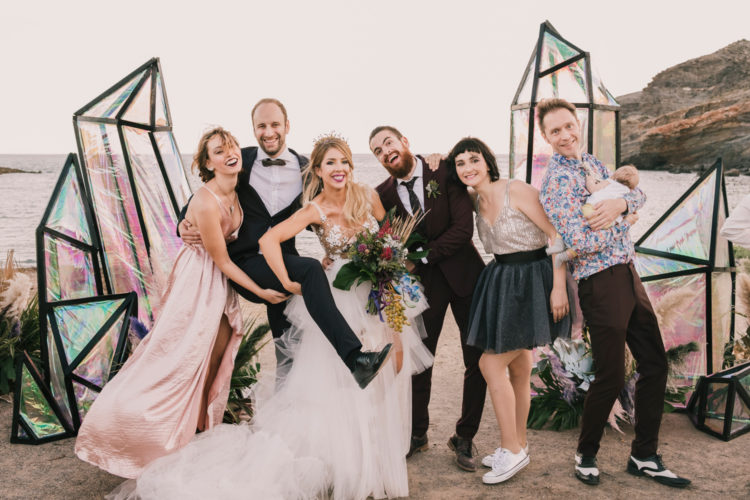 The wedding altar was an iridescent one, the groomsmen were wearing black tuxes and the bridesmaids were wearing mismatching dresses 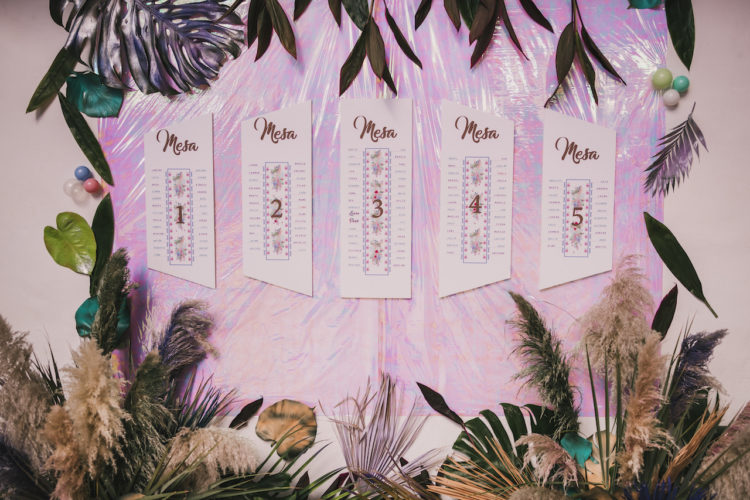 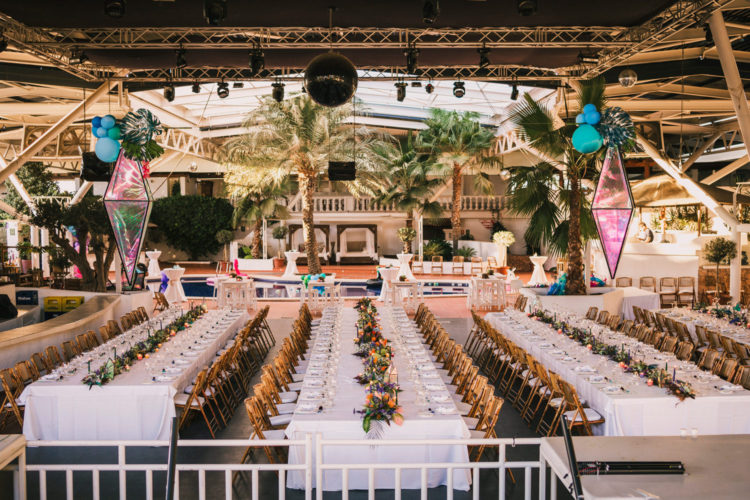 The wedding reception space was done with lots of balloons, tropical leaves and iridescent rhombes 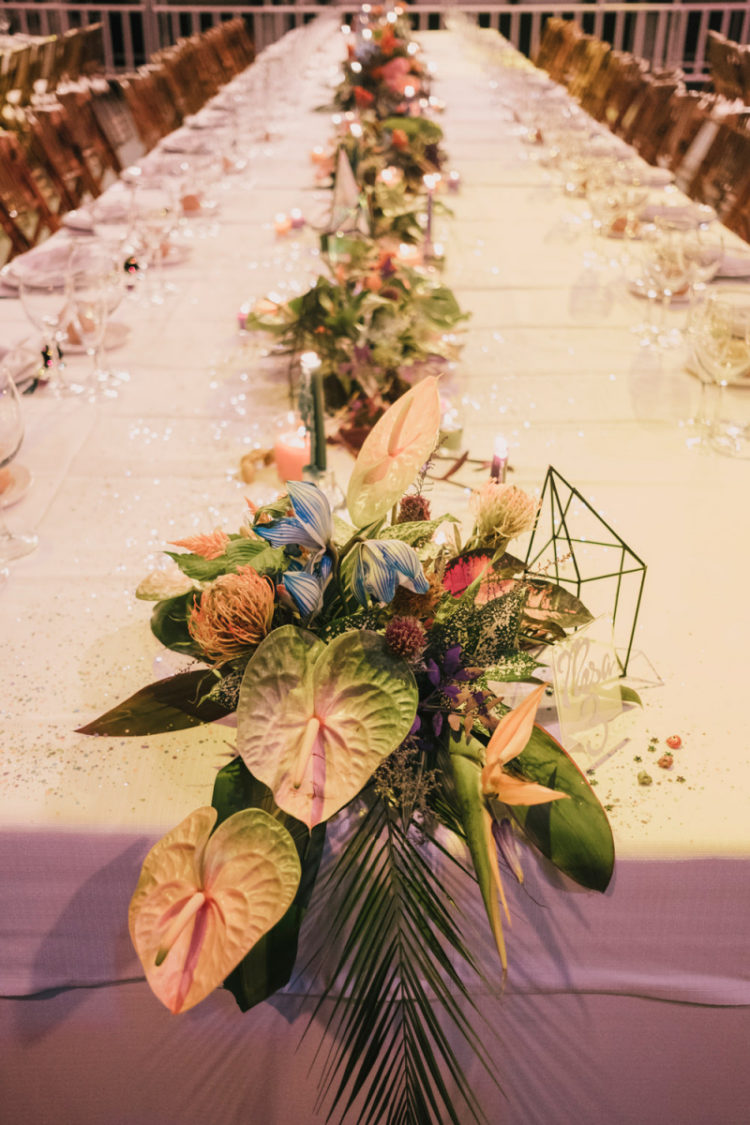 The table runners were done with greenery and foliage, with pastel blooms and candles 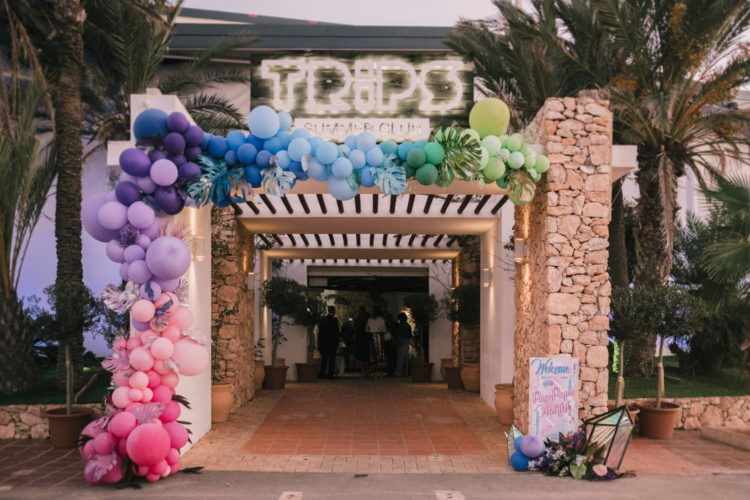