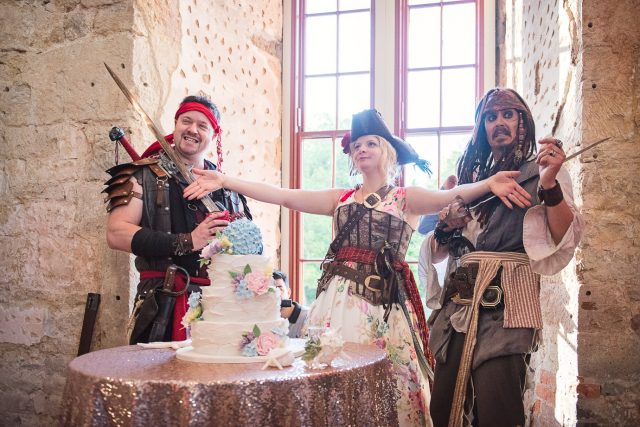 This wedding was fun and filled with pirates, florals, good food and laughter

Zoya and JP decided to incorporate everything they love into their wedding: groom’s Scottish heritage, florals, pirates great food and dancing all night long.

The couple married at the very grand Lulworth Castle in Dorset, looking out over the sea. The ceremony was held by Captain Jack Sparrow; the seating plan was done in Treasure Island style, and the wedding breakfast was filled with love of all things pirate and sea-scape. The ceremony involved lots of laughter, stumbled vows (which they’d written themselves) and comical noises from the dog, who seemed less than pleased to be attending the event in a kilt.

The bride’s stunning floral dress is ‘Untamed Love’ by Charlotte Balbier, which she was wearing with custom-painted Converse and the pearls JP presented her with on the day of the wedding. The groom stayed true to his Scottish roots by wearing Scottish Queen Cameron’s Highlanders colors in family formal kilt and groomswear. Each bridesmaid chose a dress that she preferred in the color ‘Meadow’ from David’s Bridal.

The decor was designed around the pirate theme: there was a cork pirate ship on each table, the table names were different brands of rum. The place settings were styled with names on a message-in-a-bottle, the bottle filled with sand. The menu was put on glued shell holders, the shells were collected by the couple on various beaches. The couple designed two pirate flags to greet the guests. The confetti were done of roses from the couple’s garden – such a great smell and biodegradable! 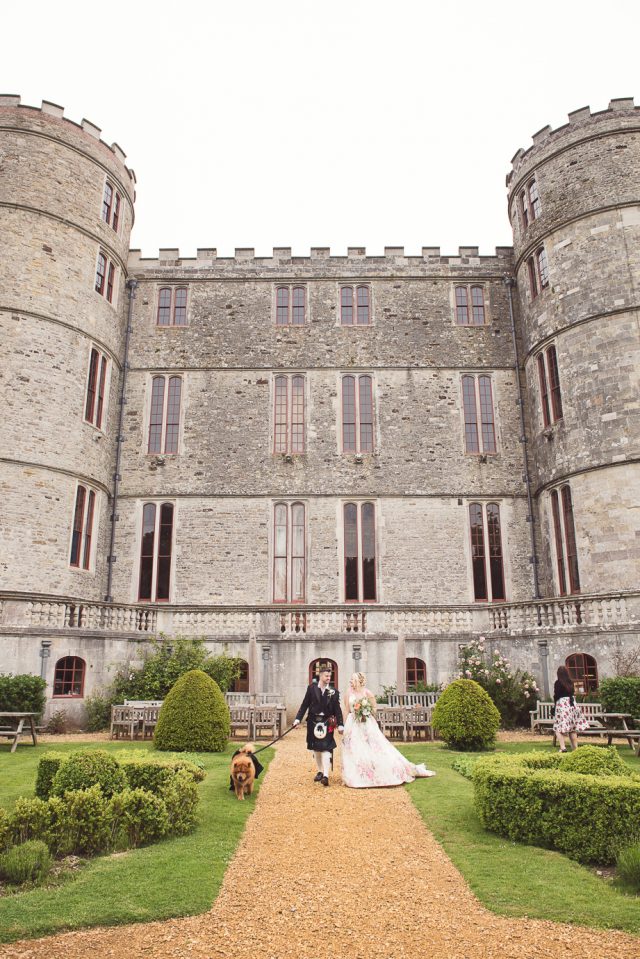 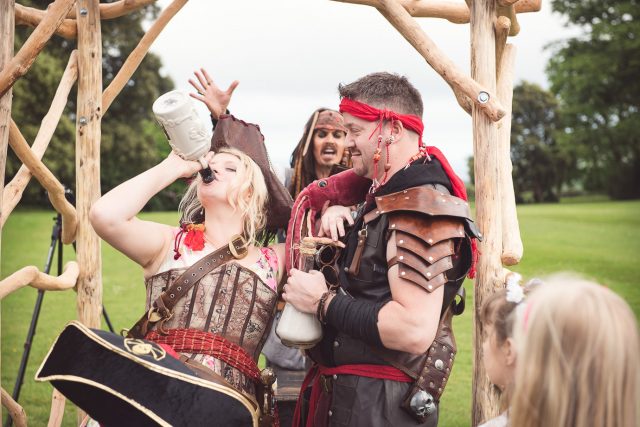 Jack Sparrow was an officiate at the ceremony 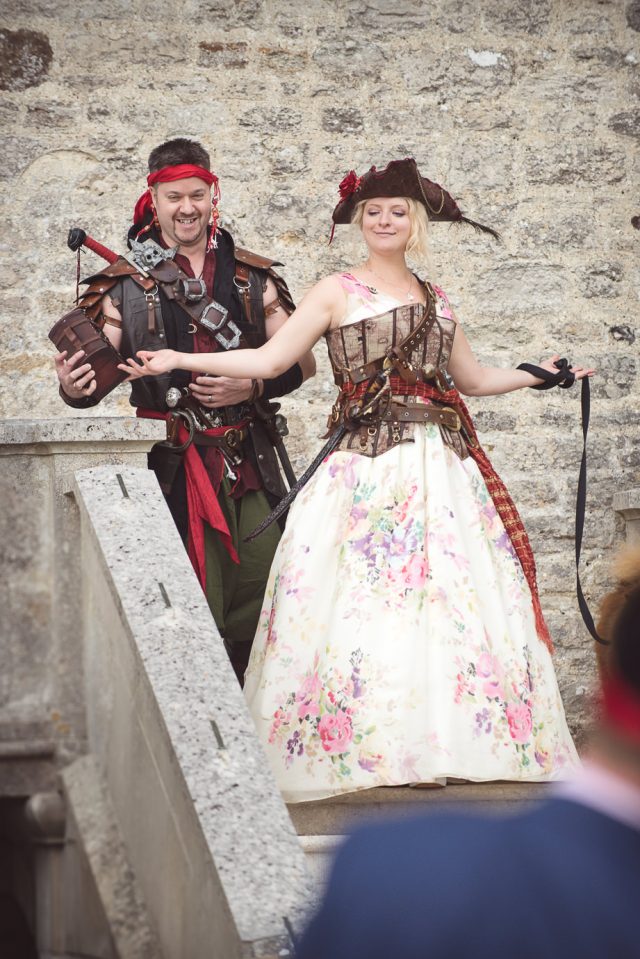 The bride was wearing a floral wedding dress and some pirate accessories, and the groom was dressed as a pirate 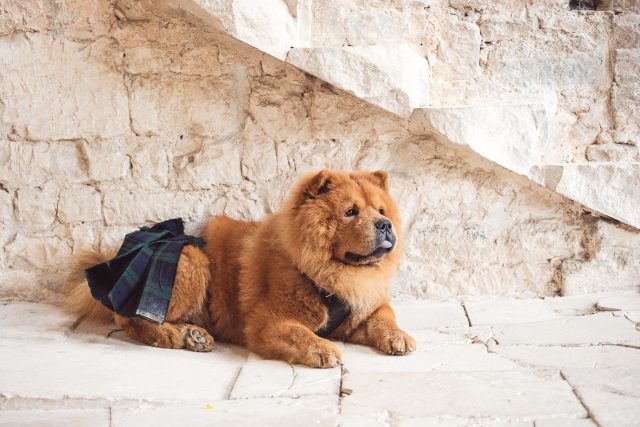 Their dog was wearing a kilt for the ceremony 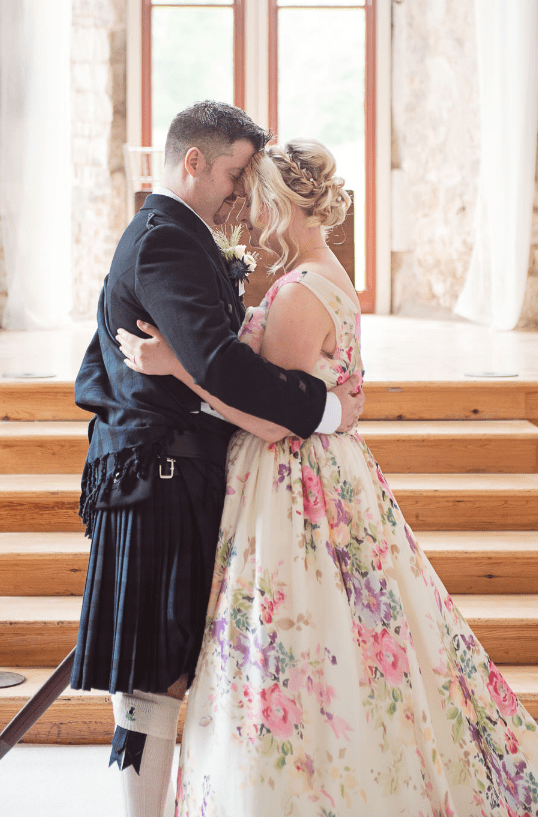 The bride took off her pirate accessories, and the groom was wearing traditional attire of his family 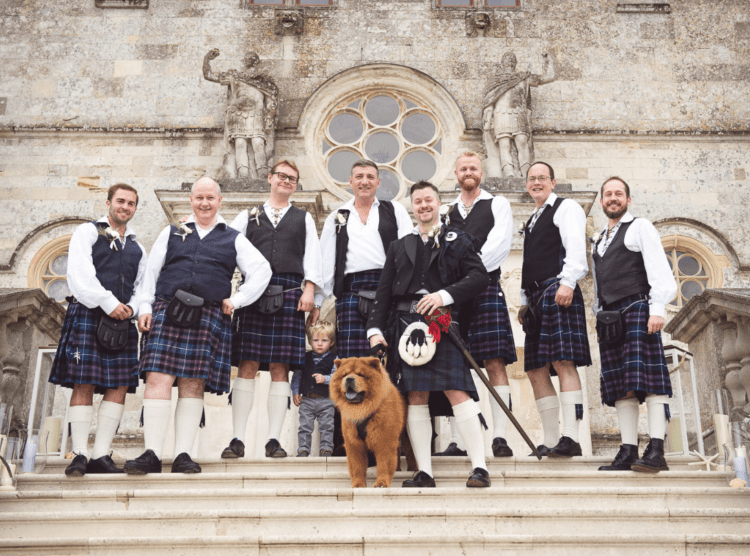 The groomsmen were also wearing kilts 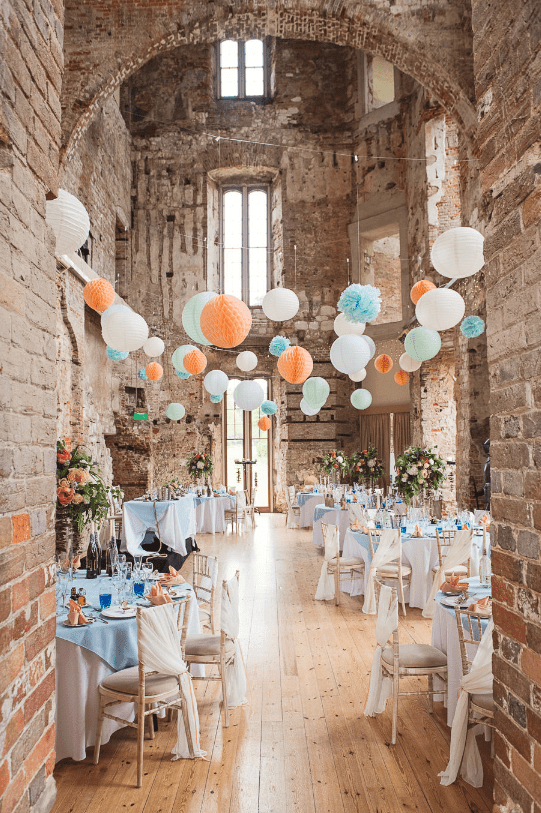 The decor was colorful and sea-themed, in blue and orange shades 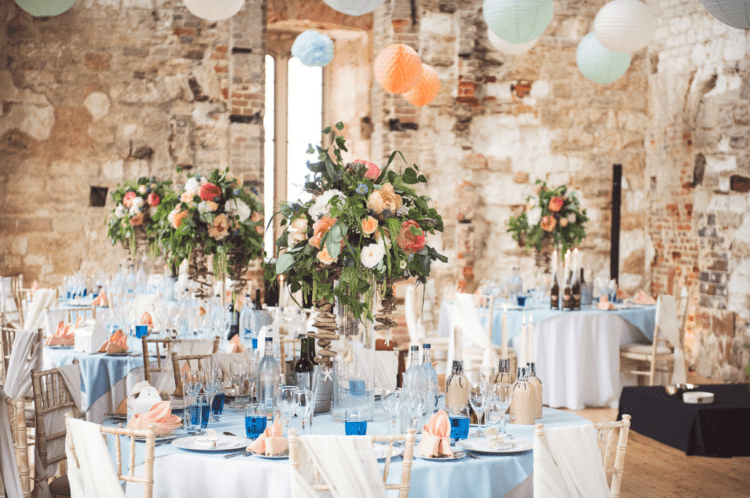 The wedding centerpieces were colorful floral ones, with paper lanterns around 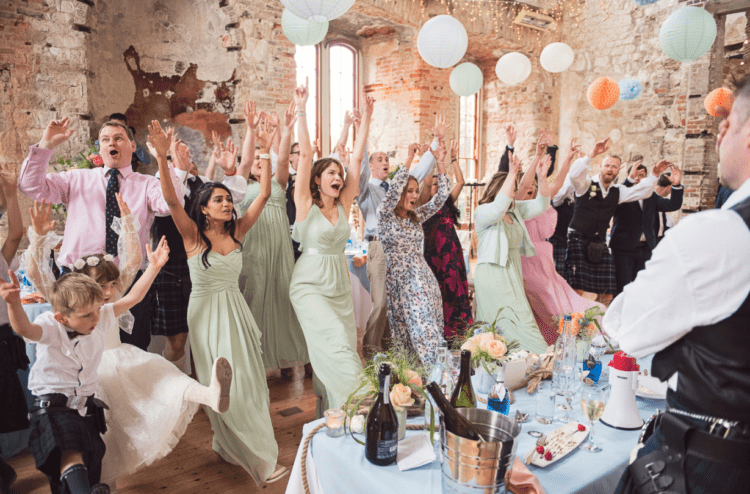 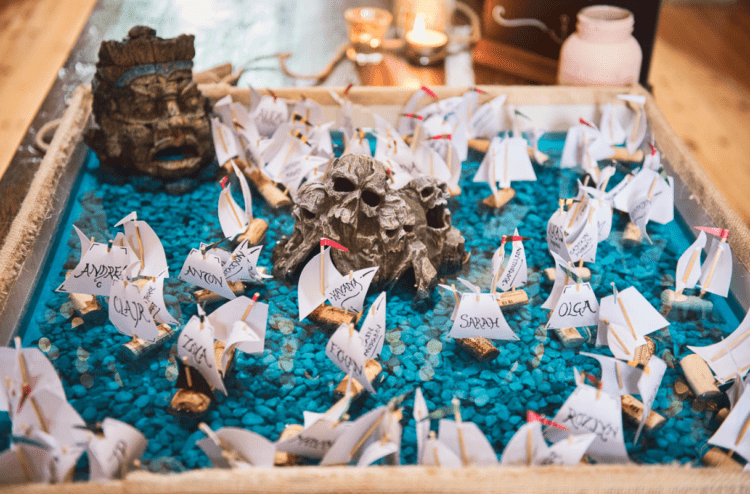 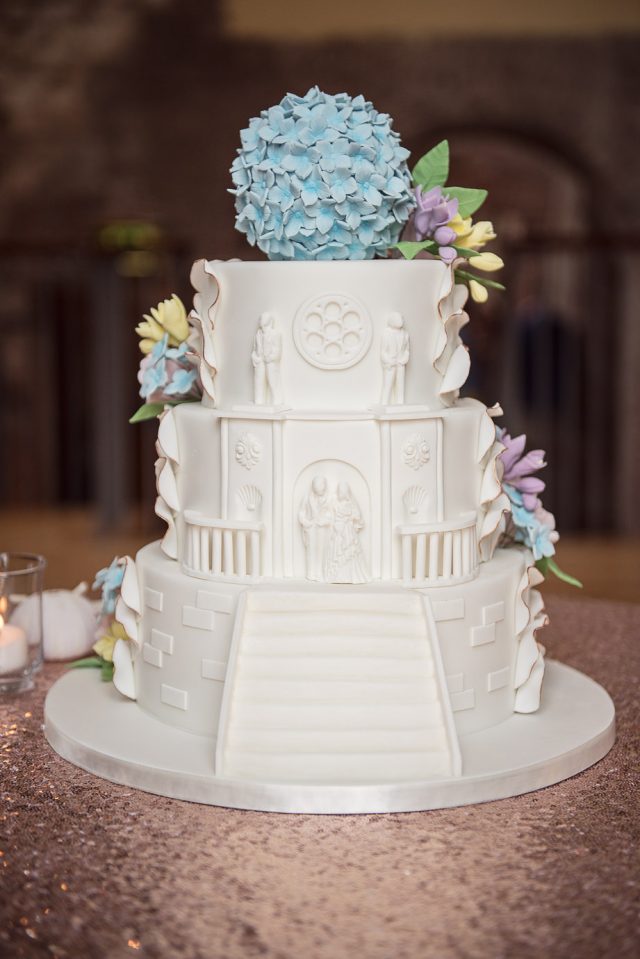 The wedding cake was a white one, with the pirate castle theme, and decorated with pastel sugar flowers 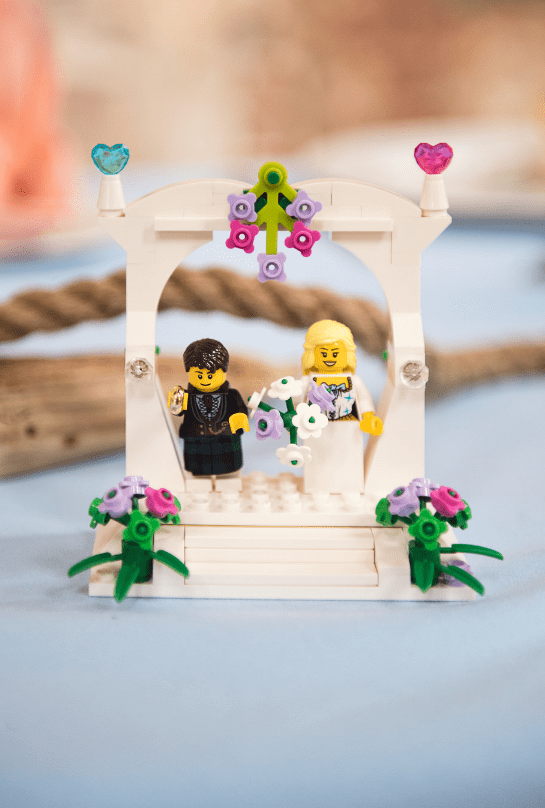 Such fun small decorations could be seen throughout the wedding venue 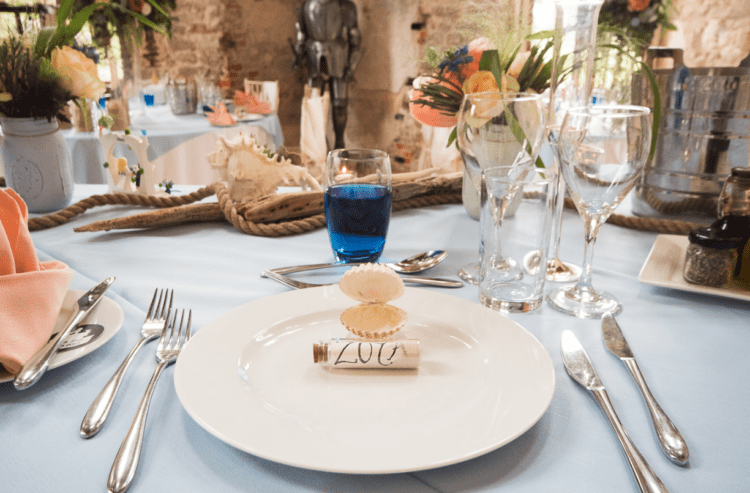 The tables were styled in the sea theme with rope, with shells, messages-in-a-bottle and candles