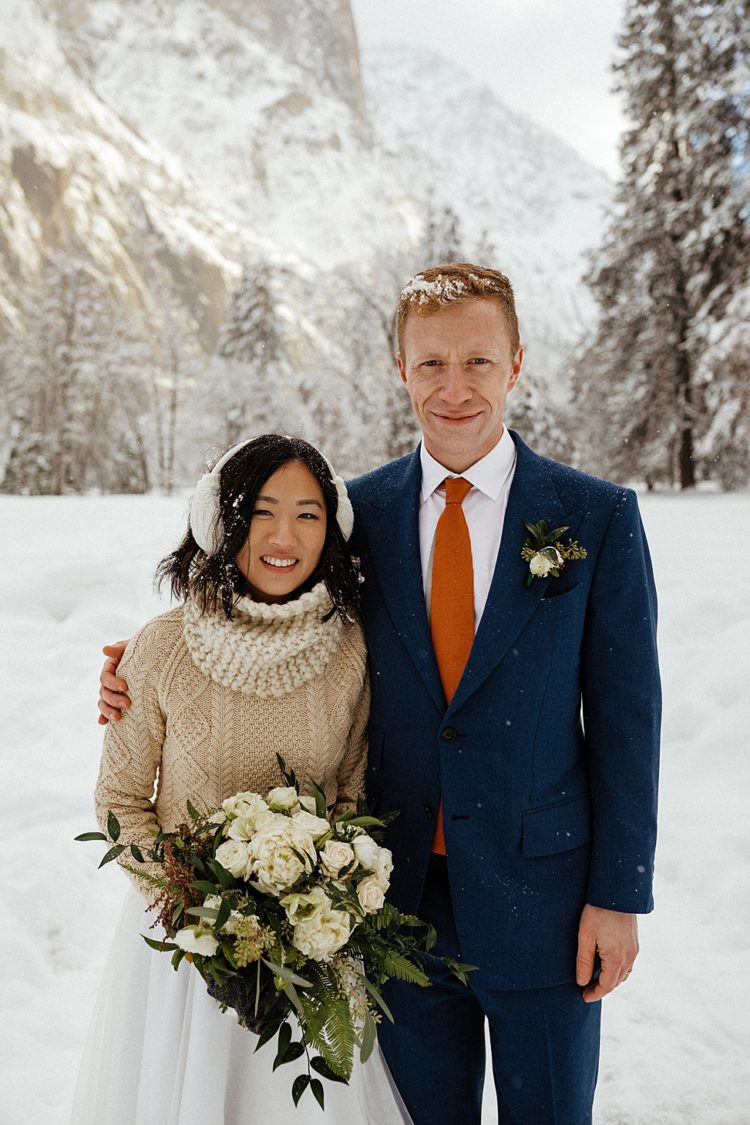 This couple tied the knot at Yosemite Park, and it was a cozy brunch at a historic hotel in the mountains, followed by a snowy hike with waterfalls.

The Ahwahnee Hotel was the clear choice of venue, with a combination of grandeur and outdoorsy vibes. But because it’s located in a National Park, there were no options for catering besides the park’s concessionaire. The rate for a daytime event was less than an evening event, plus we got a discount because there was a limited menu due to kitchen renovations on the date. Still, the venue, food, and beverage ended up being the biggest chunk of the budget. The remote location had a ripple effect on the rest of the budget since it’s a long drive on winding, one-lane roads to get in and out of Yosemite Valley.

The couple was able to skip several common expenses. There was no ceremony site, since we had it outdoors with only a few people. They didn’t have a wedding party, didn’t do paper invitations, and just played music from a playlist. After the reception they invited everyone on a hike to Yosemite Falls instead of having dancing or other entertainment.

The bride DIY-ed as many things as possible, and they even made their own wedding rings! The DIY elements focused on things that could be done in advance and were easy to transport; the bride also made her own skirt (a full circle skirt with four layers of tulle. Her mom helped too, making their ring holder, the bride’s cape, and arm warmers. 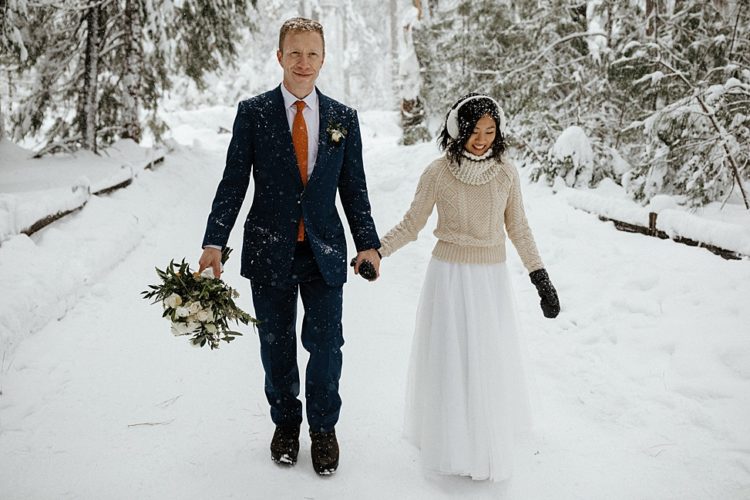 The groom was wearing a navy suit with an orange tie 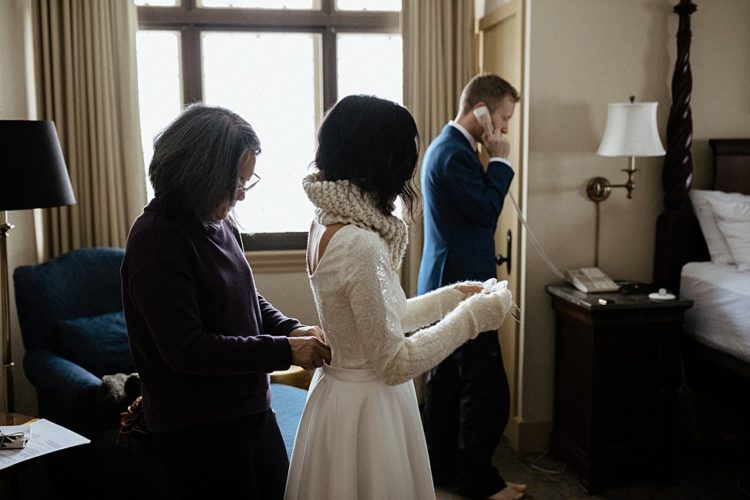 The bride was wearing her handmade tulle skirt, a sparkling top with a cutout back, handwarmers, an infinity scarf 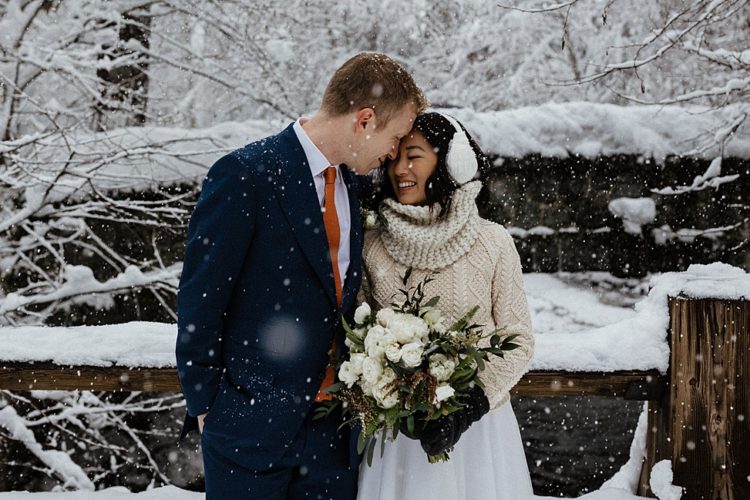 She covered up with a sweater, she was wearign earcuffs and carrying a neutral wedding bouquet 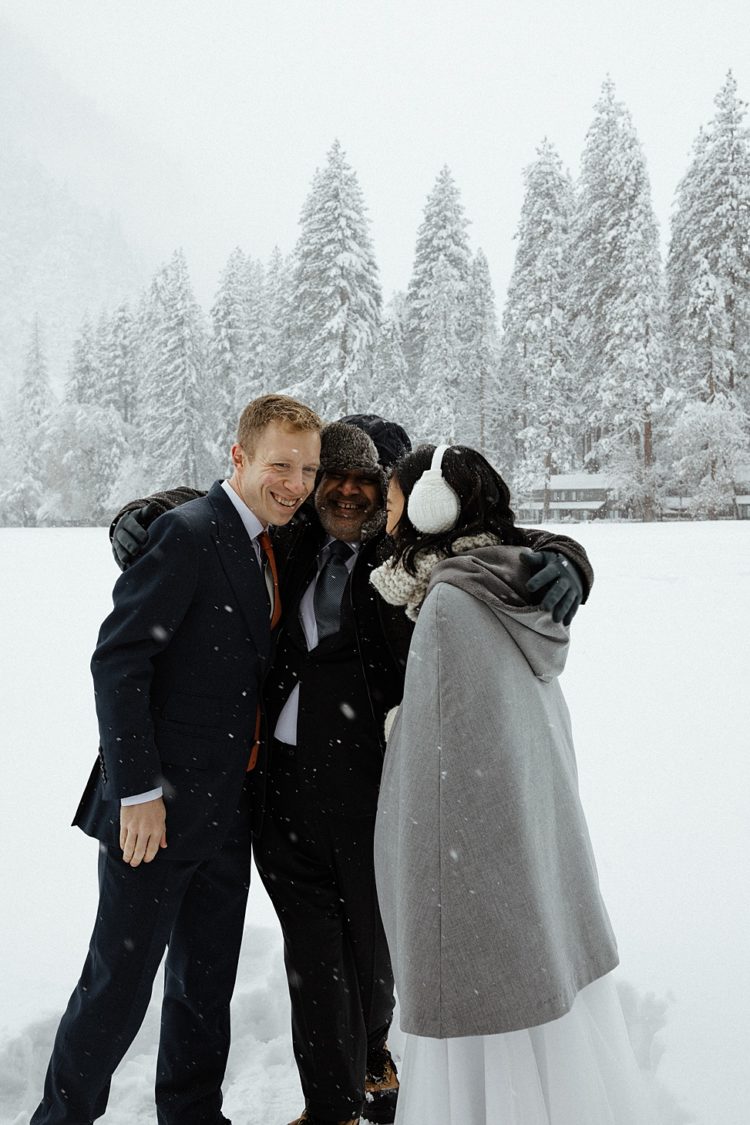 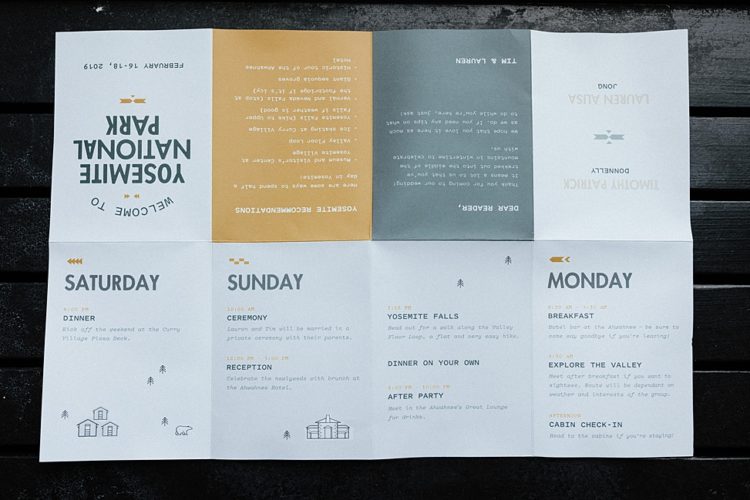 All the stationery was hiking and woodland style 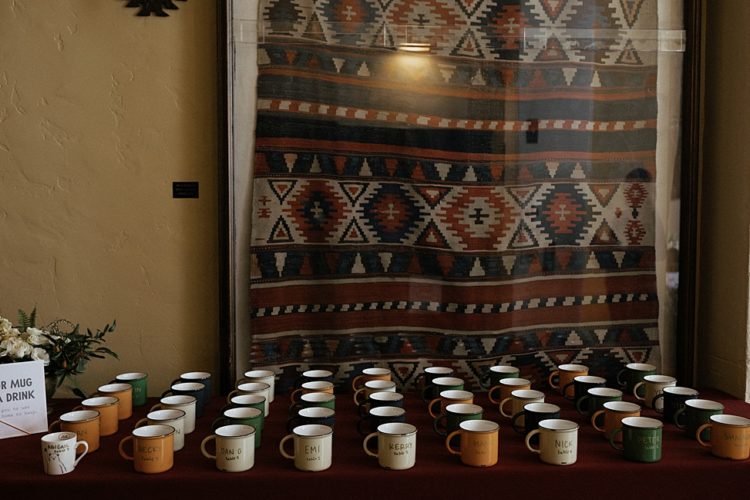 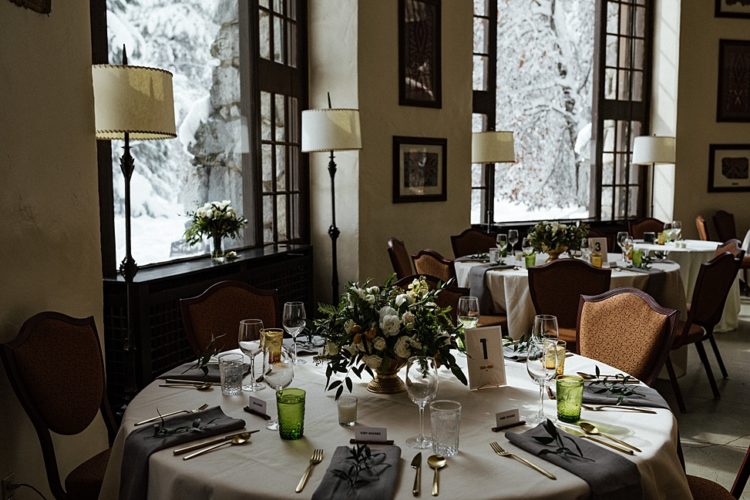 The reception took place right in the park, it was cozy and done with neutral blooms and colored glasses 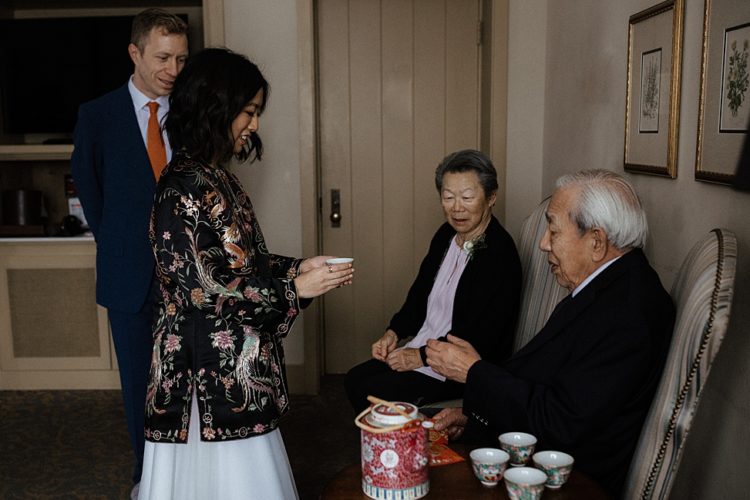 There was a poignant tea ceremony, which is traditional for the bride's culture 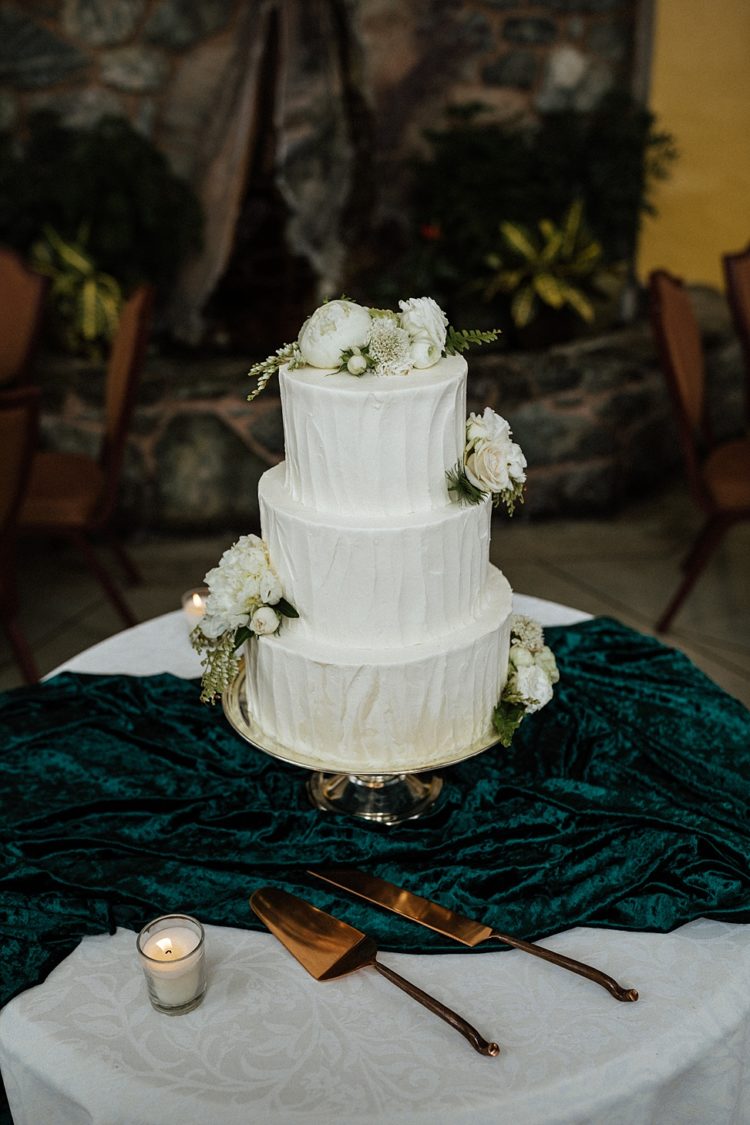 The wedding cake was a white textural one, with neutral blooms 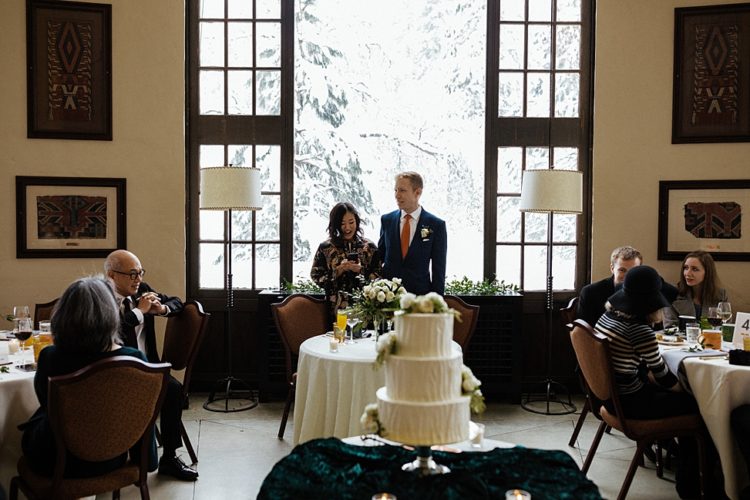 The backdrop for the sweetheart table was the park itself 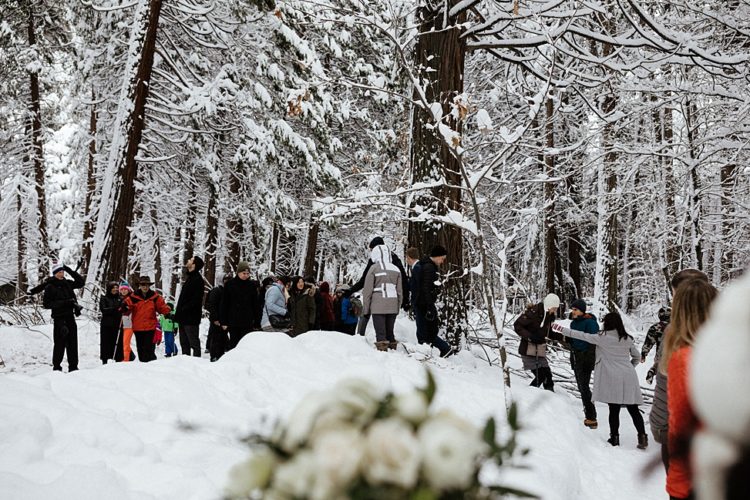 After the reception everyone went hiking in the snow