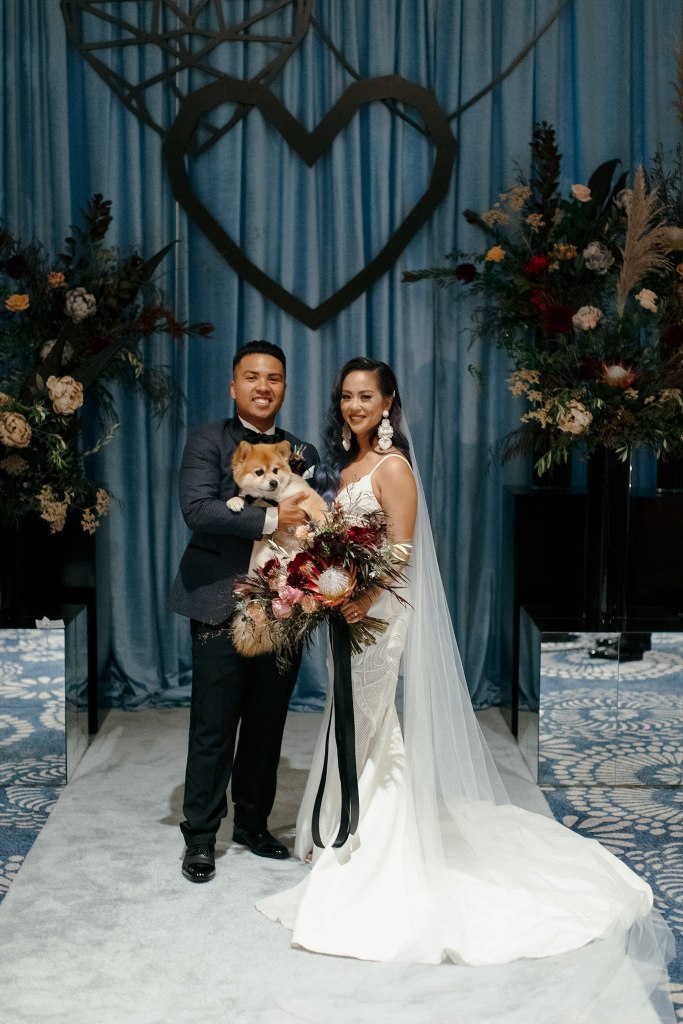 Stephanie and Rich married on their 10 year dating anniversary, to the day. As a couple, they love to be creative and tell a story – Rich’s proposal included an elaborate scavenger hunt to all they significant date spots across San Francisco, with meticulously planned video clues pre-recorded and all their friends and family waiting at the final proposal spot!

The couple came up with the concept of creating a ‘city’ to represent their relationship as their reception theme. They hinted towards it with house-shaped structures and city lamps as props and created ‘destinations’ for their guests to visit during the reception based on all their favorite past-times; a car show, an art gallery, a bar named after their dogs and ‘restaurants’ of their favorite foods, to name but a few.

The deep and moody color palette was Stephanie’s vision. For their ceremony, the couple incorporated all three of their heritages into their western-style wedding; a Chinese tea ceremony with an intimate group prior to their main ceremony, Filipino veil, cord and coin traditions performed by their closest cousins and a Cambodian knot tying ceremony, performed by their bridal party. Stephanie loved the vintage style of all the qipaos featured in In the Mood for Love, so she actually recreated the print and had it printed and made into her cheongsam.

The bride was wearing a beautiful lace mermaid wedding dress with an open back (to show off her tattoos) and a train. The groom was rocking a modern grey tux with black lapels. Take a look at the beautiful pics of this wedding! 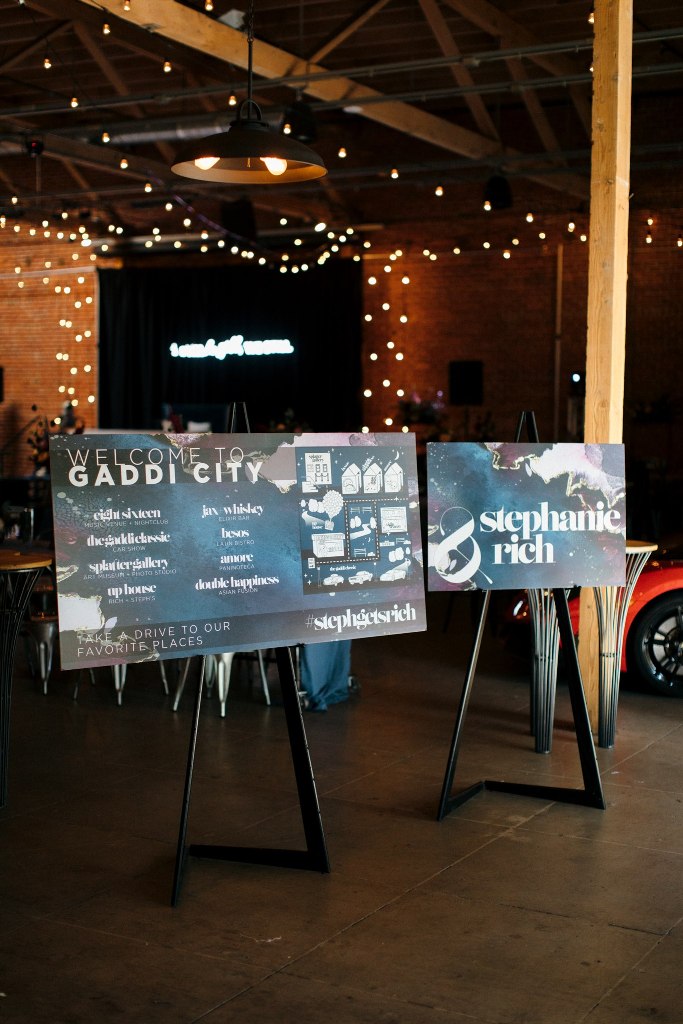 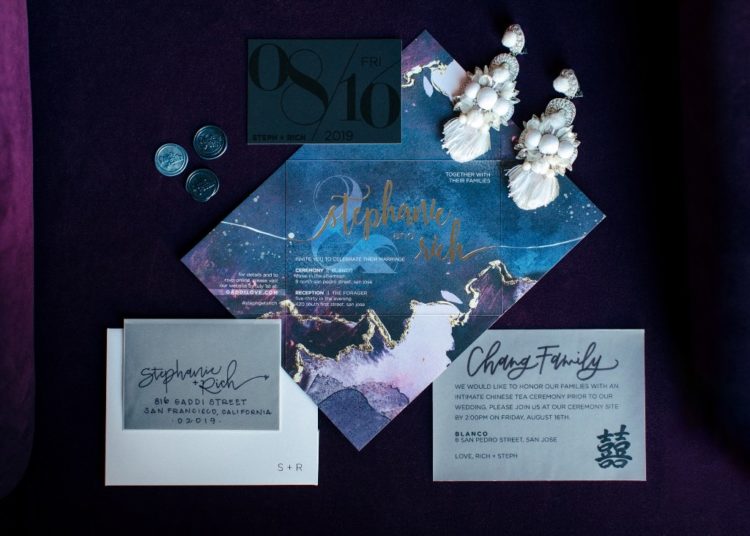 The wedding stationery was done moody, with watercolors and gold leaf 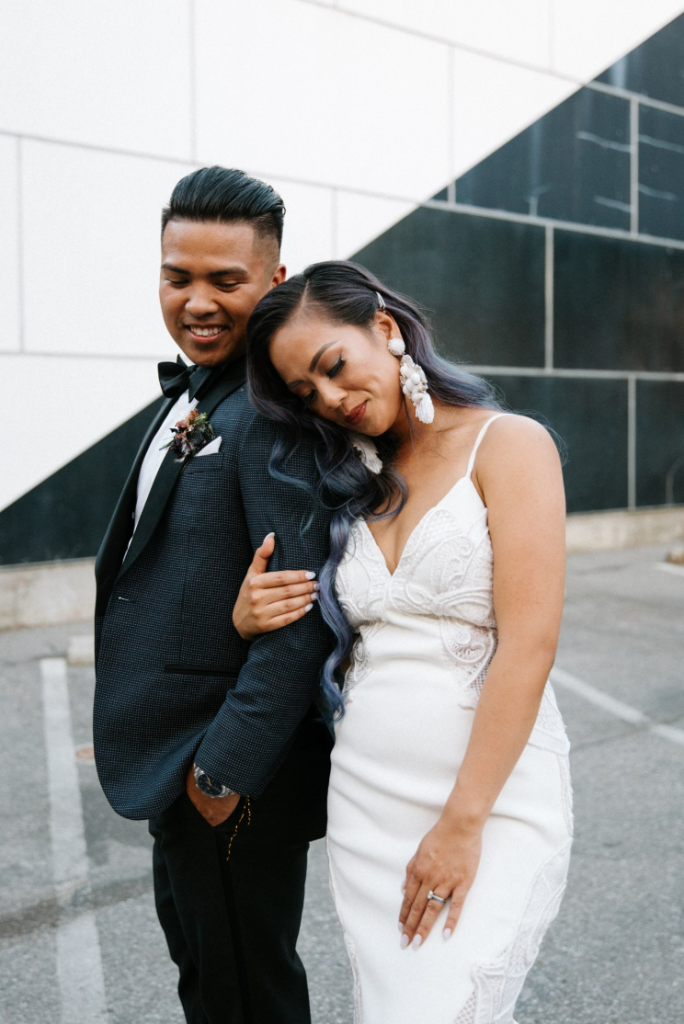 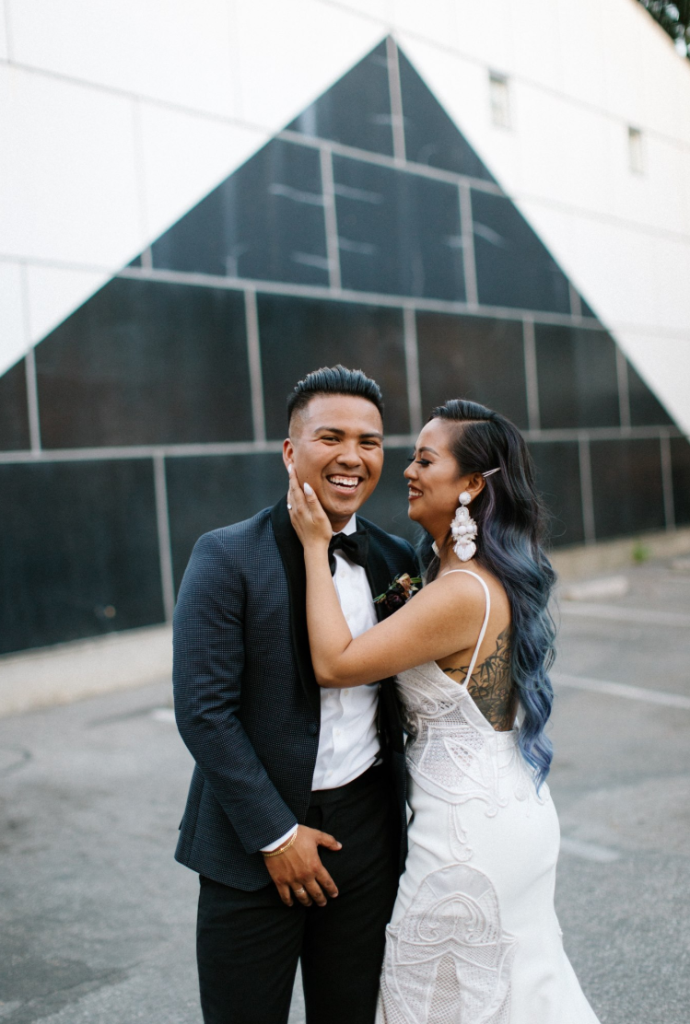 The groom was rocking a modern tux with black lapels 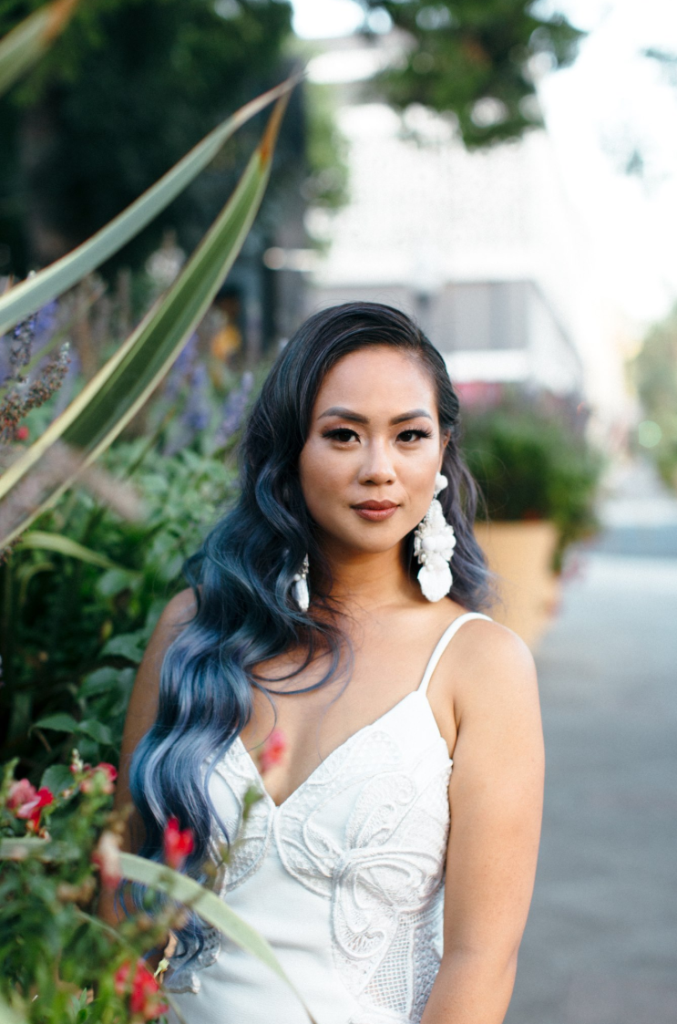 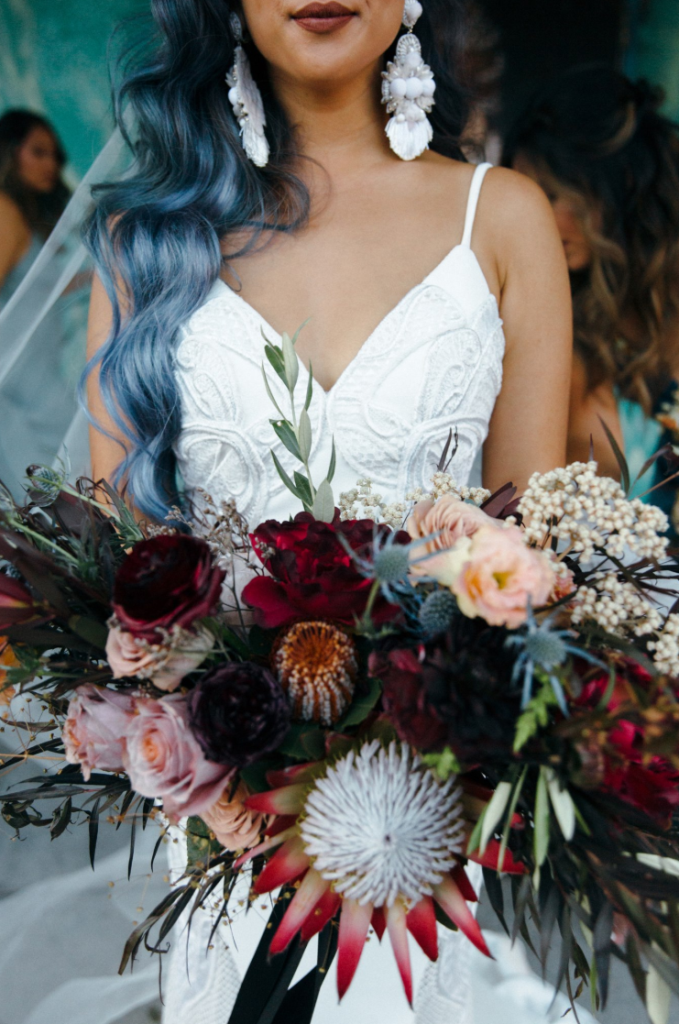 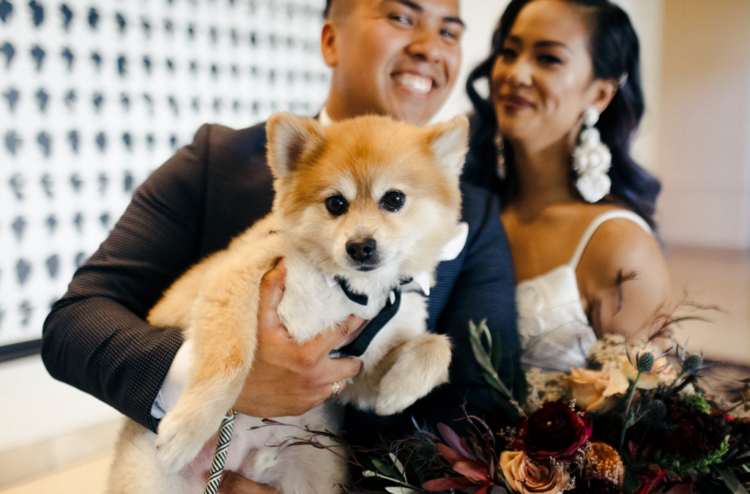 The couple's dog took an active part in the wedding 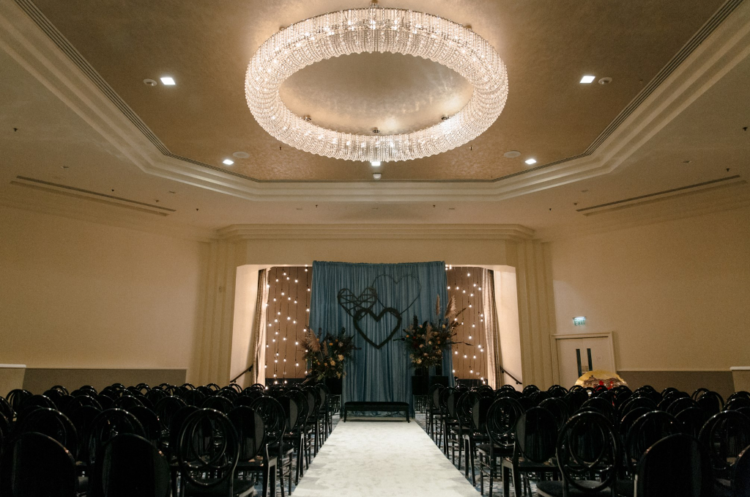 The wedding ceremony space was done with black chairs and vases with pampas grass, greenery and blush blooms 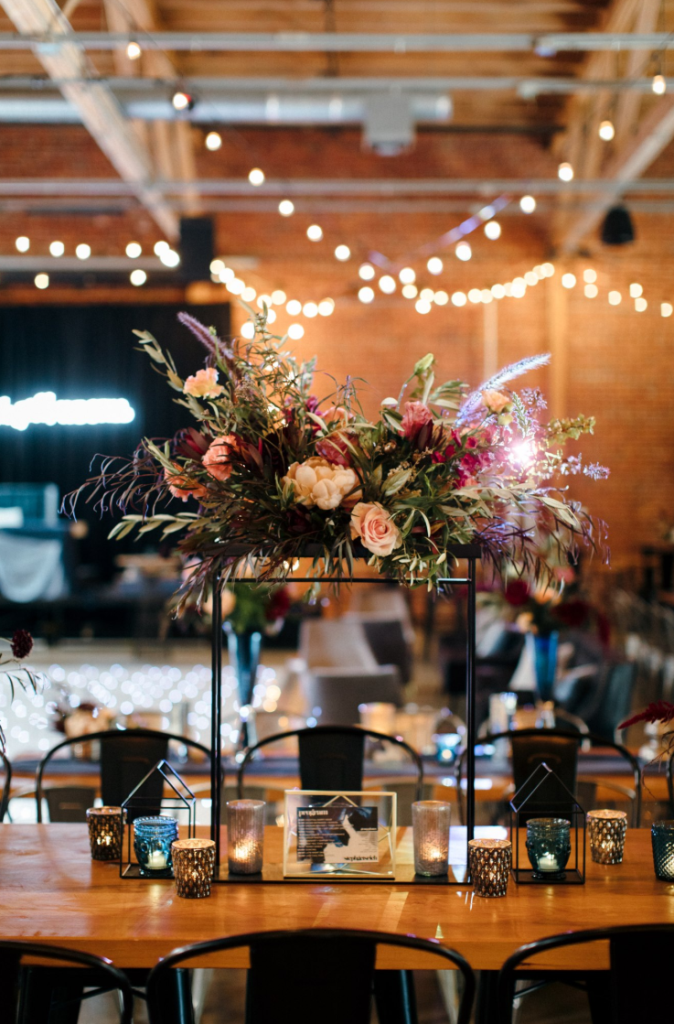 The wedding tablescapes were done with candles, lush florals and greenery 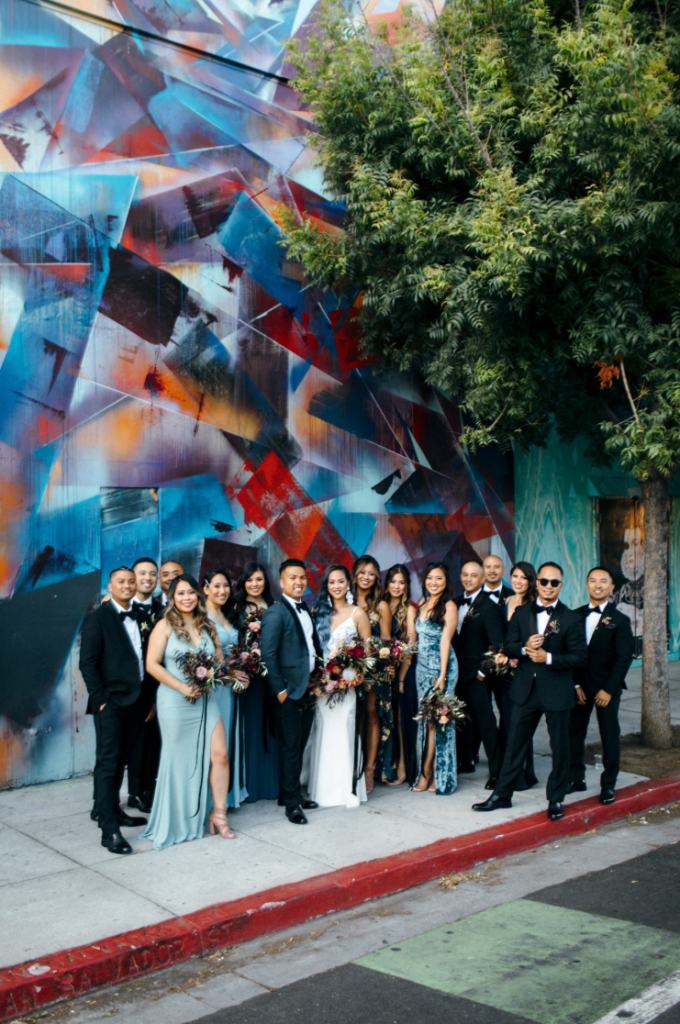 The bridesmaids were wearing mismatching blue maxi dresses, and the groomsmen were rocking black tuxes 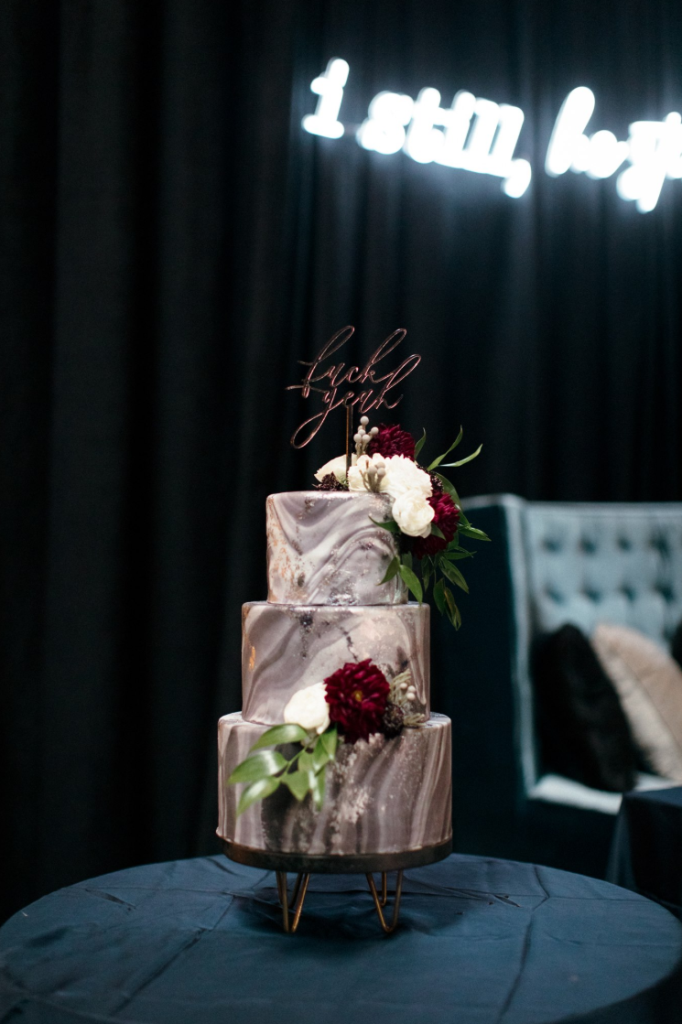 The wedding cake was a grey marble one, with white and burgundy blooms and a calligraphy topper