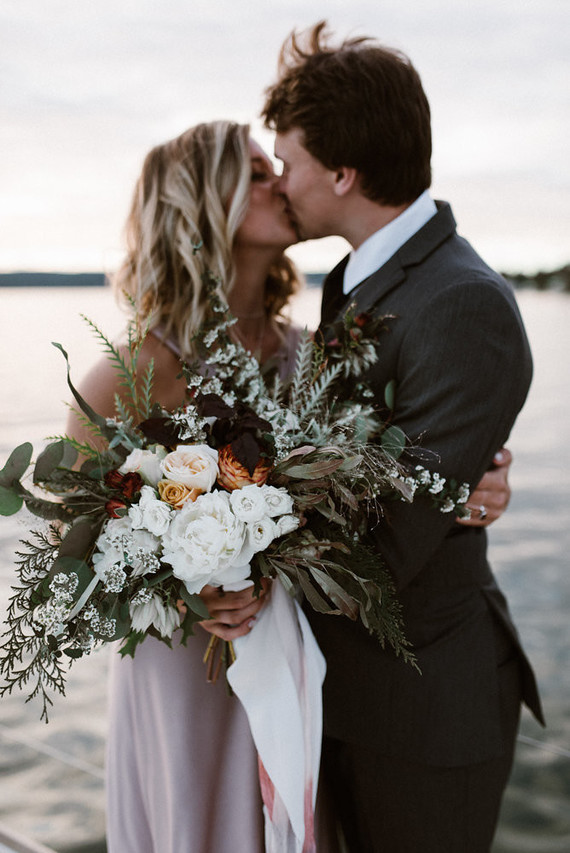 If you love travelling on the whole and sailing too, this wedding editorial is sure to excite you very much! This elopement editorial was created by Emily of Lace & Brass Events and photographer April Zelenka, and it’s a sailboat elopement with all the little details sprinkled throughout: It all took place at Lake Superior and the Apostle Islands, and every bit of this celebration is influenced by the location itself.

The bride was wearing a sleek blush gown? It’s by Coralie Beatrix on Etsy, and would make for a lovely bridesmaid dress too. She was also wearing a statement necklace, some flowers in her hair and a floral posie on her arm. The groom was rocking a grey suit, a black tie and a creative boutonniere.

The goal was to incorporate elements of earth, wind, and water throughout the entire design. All of the pottery was custom made by a local artist. The beeswax candles were hand poured right on Madeline Island. The earthy tones of the dress, florals and décor match perfectly to the sea caves and cliffs of the Apostle Islands. The ceremony and dinner table were staged on the cliffs of Madeline Island overlooking Lake Superior. Kudos to Bash Calligraphy on nailing the earthy-yet-modern theme on the menus and invites.

An exquisite 57’ luxury sailboat from Superior Charters sailed the couple to Madeline Island from Bayfield, Wisconsin. The wind we see beautifully in the waves of the dress, her flowing hair and the draping fabric on the ceremony arch and dinner table. While on the sailboat the water reflections were ever-changing, especially during sunset. 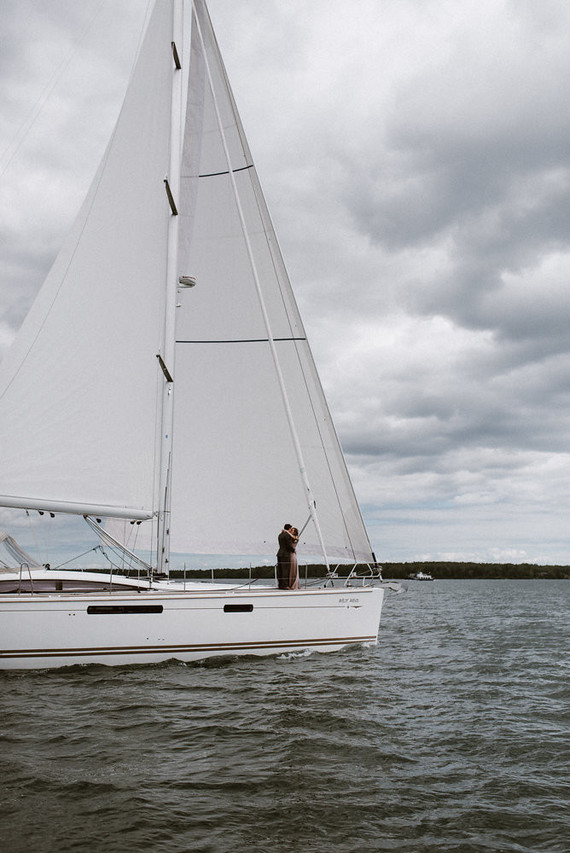 A chic sailboat took the couple from Wisconsin to an island 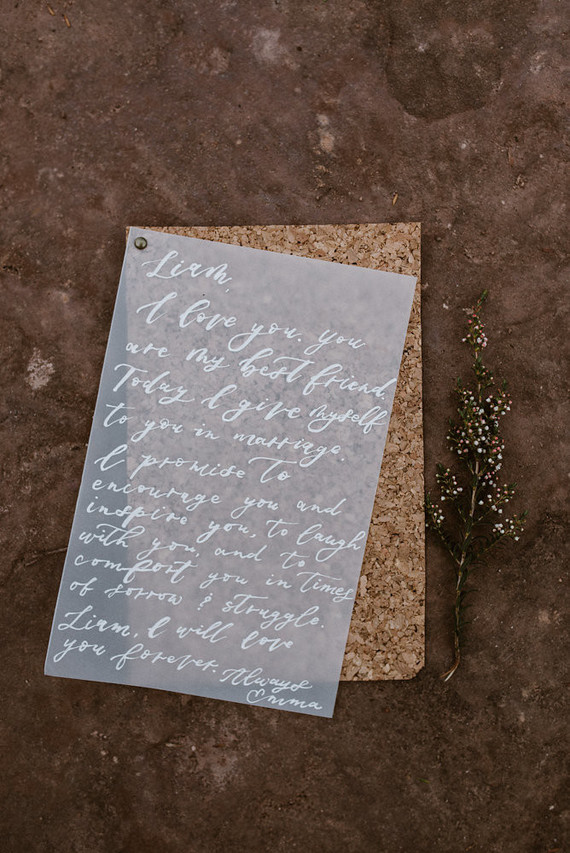 I love the idea of wedding stationery made of cork and acryl, it looks very eye-catching 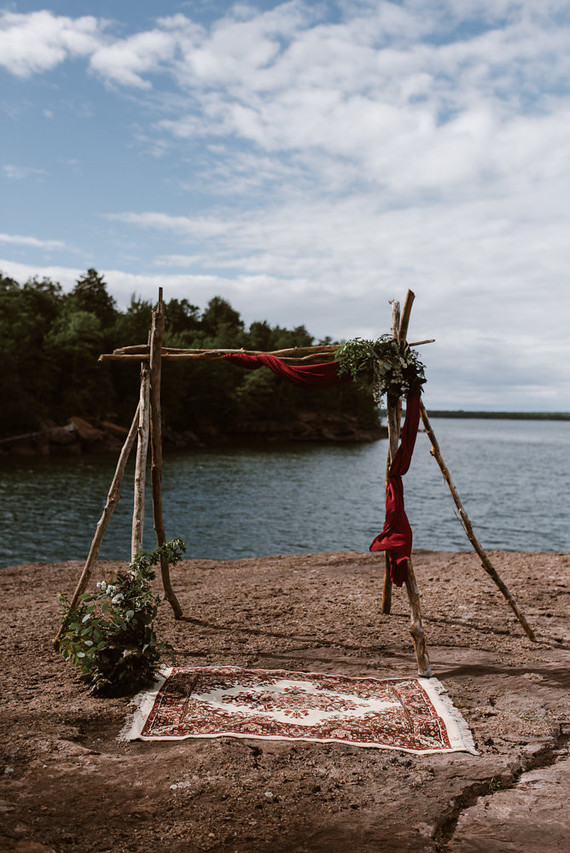 The wedding arch was made of driftwood, red fabric and some greenery and highlighted with a rug 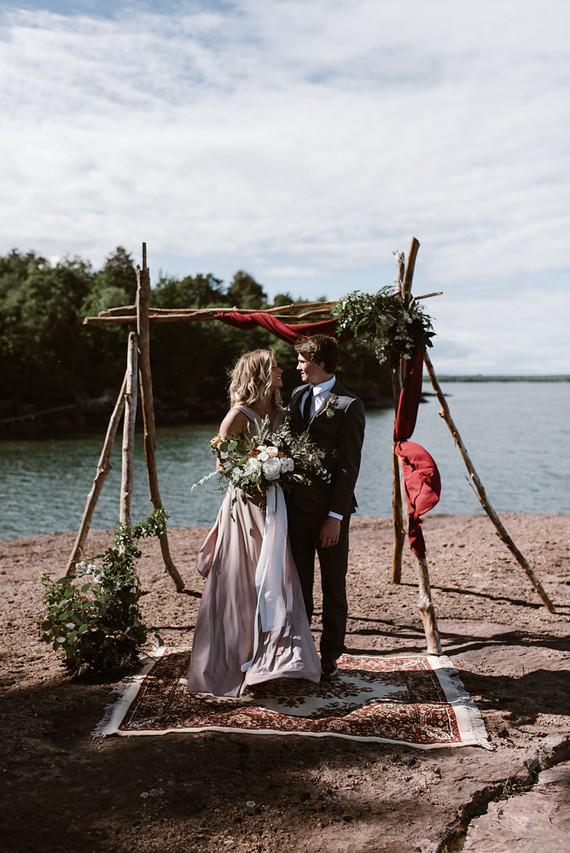 A lake shore is a great place to exchange vows 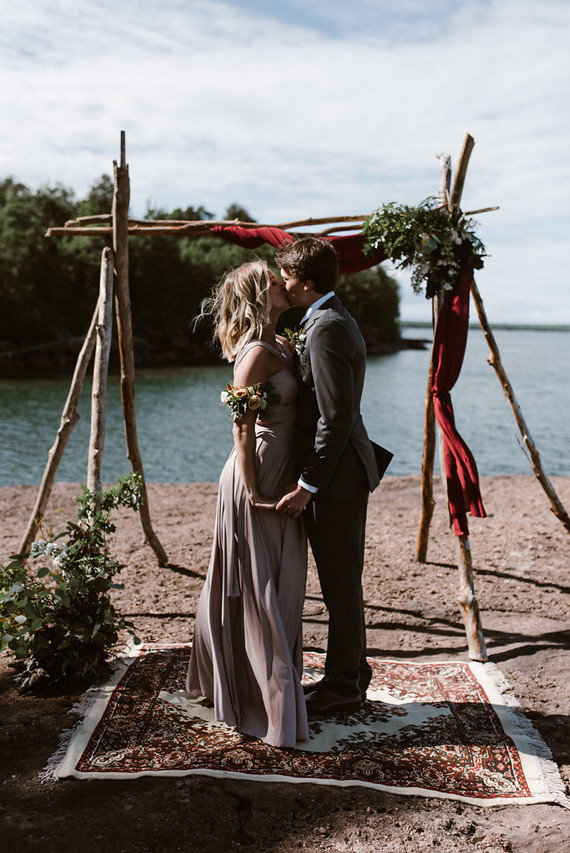 The bride was wearing a blush wedding dress with wide straps, fresh blooms on her arm and in her hair 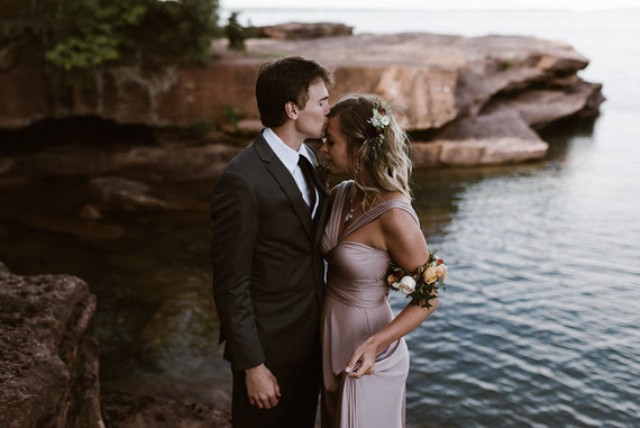 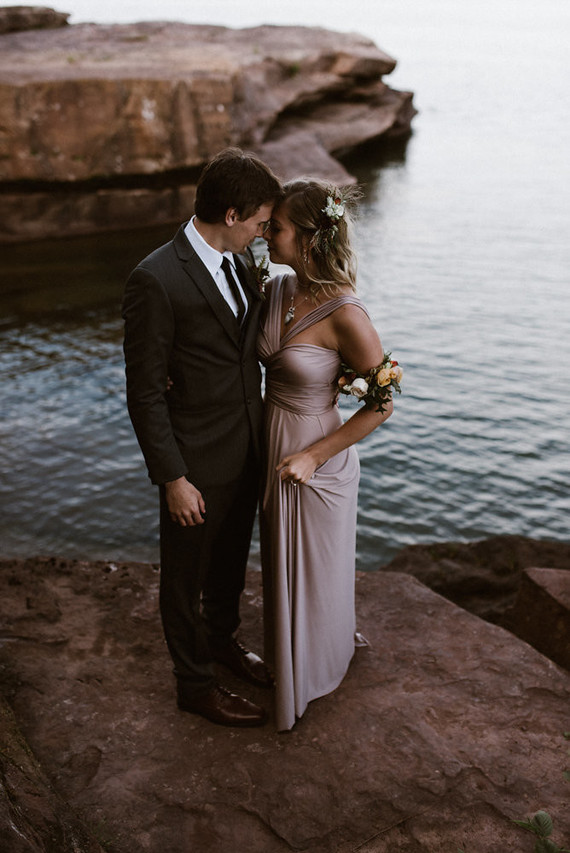 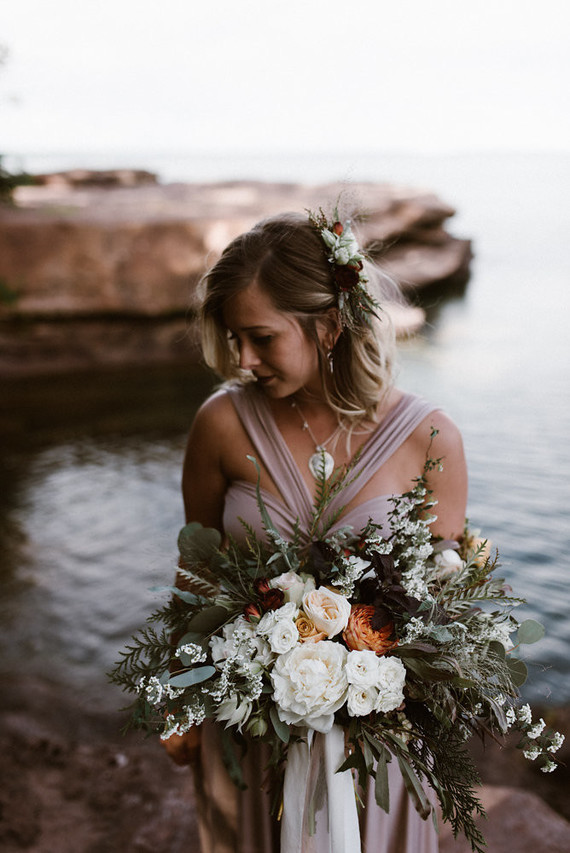 The bridal bouquet was a lush one, with white and orange blooms and lots of greenery 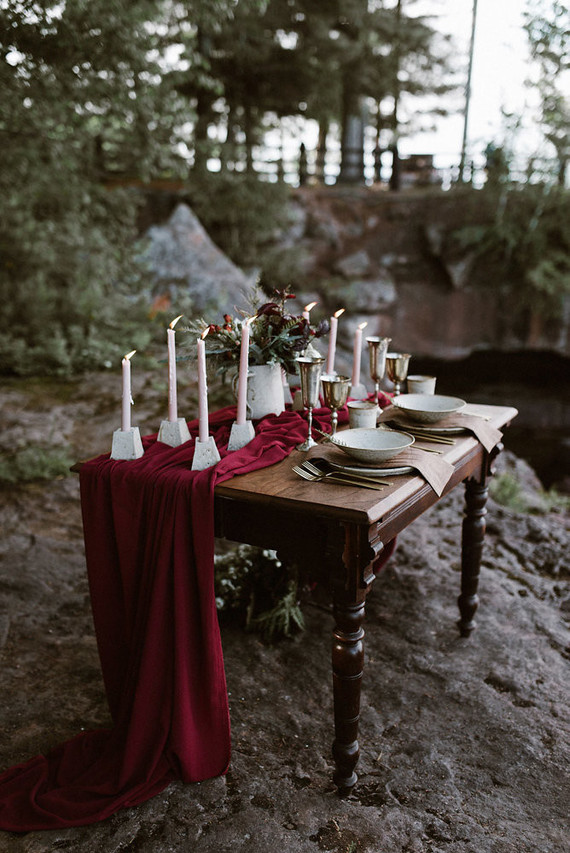 The wedidng table was done with a red fabric runner, pink candles in concrete candle holders and silver goblets 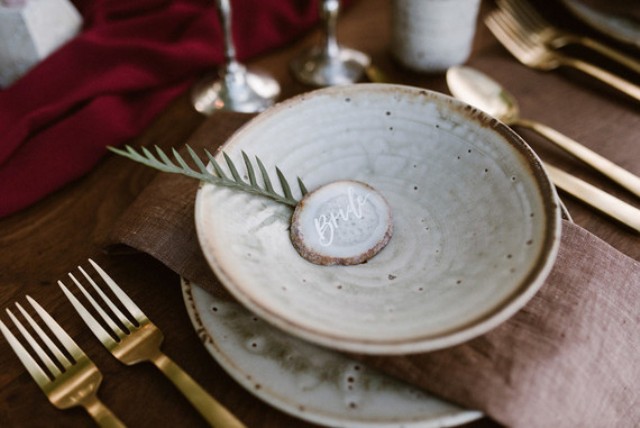 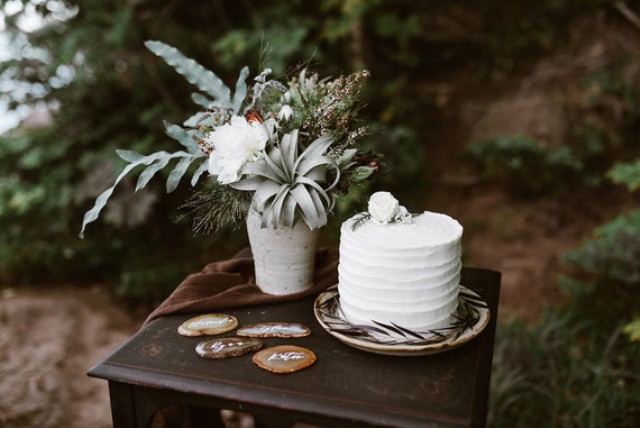 The wedding cake was a white one with a white flower on top, the arrangement next to it is made of greenery, white blooms and an air plant 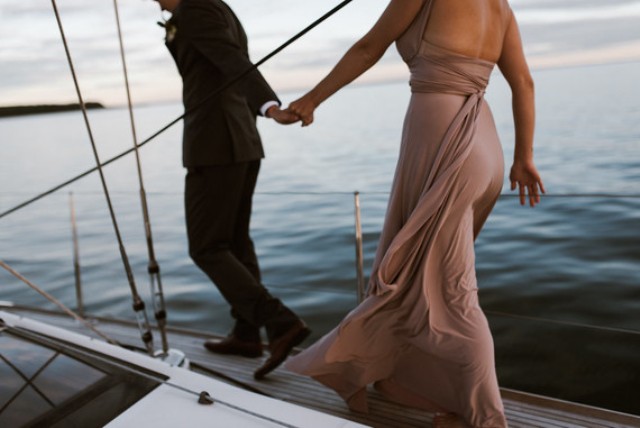 Have fun on a sailboat together like this couple 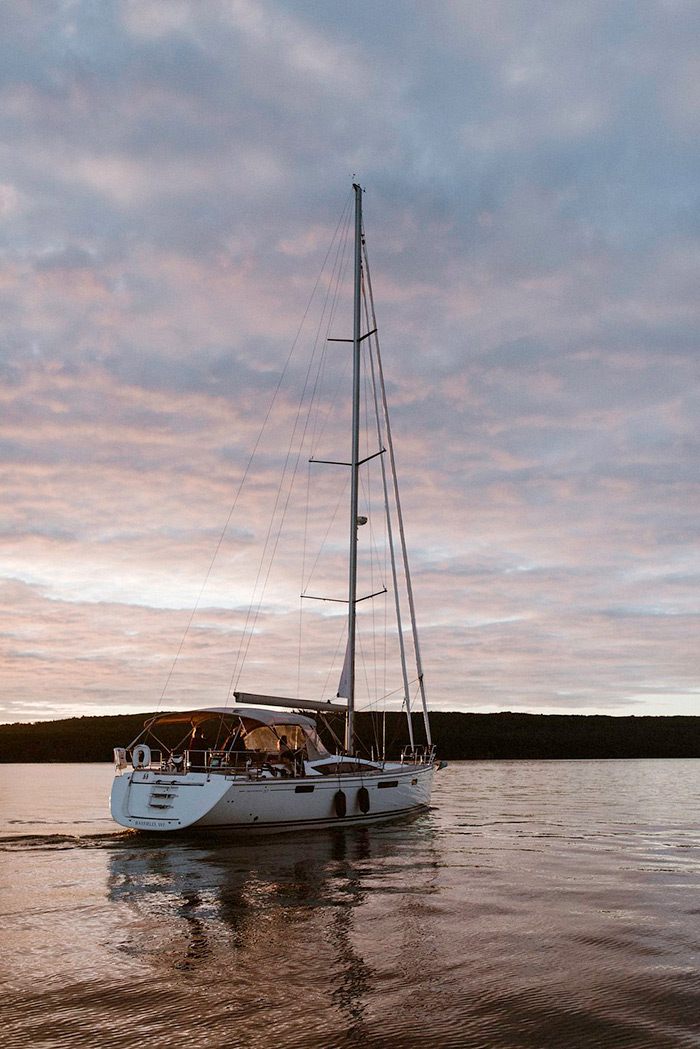 Look at these sunset colors, what can be more romantic than that