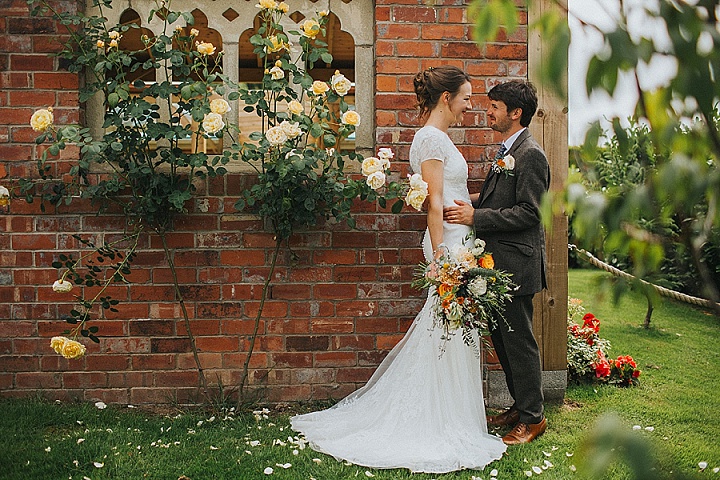 Here’s a homemade, homespun wedding of Charlie and James who held their DIY wedding on Charlie’s parents farm, and they really went to town making pretty much everything themselves. From growing their own wild flowers, to making the signage, cake stand, invitations and even the tables and benches. The whole wedding looks fantastic, a real DIY dream of a wedding.

The couple wanted to have a more informal, relaxed wedding and they had a quick ceremony in their gorgeous garden over-looking the Shropshire countryside, then headed straight back to the farm to start the celebrations. There were 100 guests in the day and 120 in the evening, it took 10 months to plan.

The bride, her mom and her sister filled the barn with buckets, watering cans, and jam jars full of flowers. They also brought in small trees which we put fairy lights around, which definitely helped soften the barn and bring the outside in. James and the bride’s dad made a huge light-up LOVE sign! That was amazing. Other than that, they mostly just had lots of bunting and fairy lights. The couple and their families made lots of things themselves for the wedding which they were so glad of because it meant the day felt really personal to them. The biggest things they made were the scaffolding board tables and benches, they gave the barn so much character, and definitely added a lot to the décor. They named the tables after different stages and tents at Glastonbury festival as a nod to where the couple met.

The couple made the wedding cake themselves and had a Chocolate Guinness cake, a Victoria Sponge and a Lemon cake, displayed on beautiful wooden cake stand that the bride’s dad made. 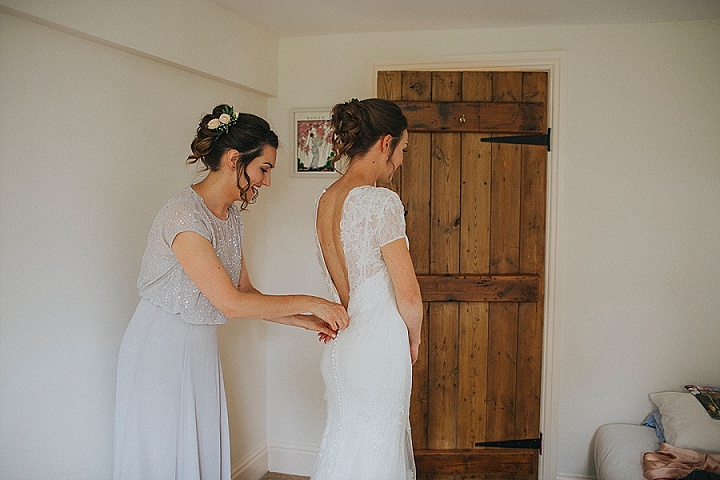 The wedding dress was a sheath lace one by Vera Wang, with a cutout back 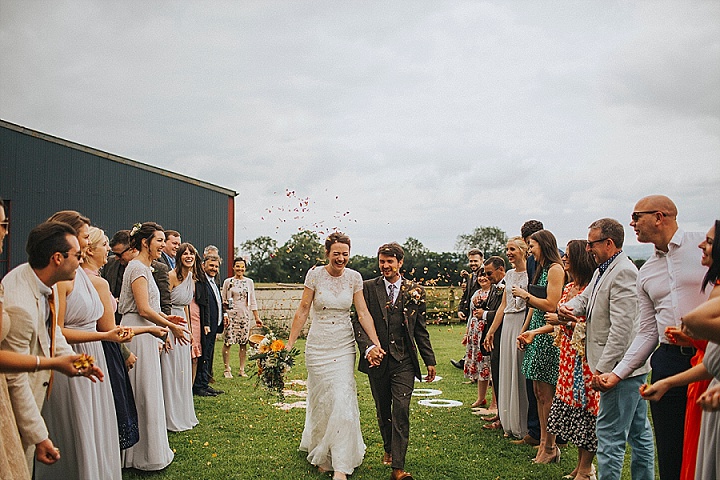 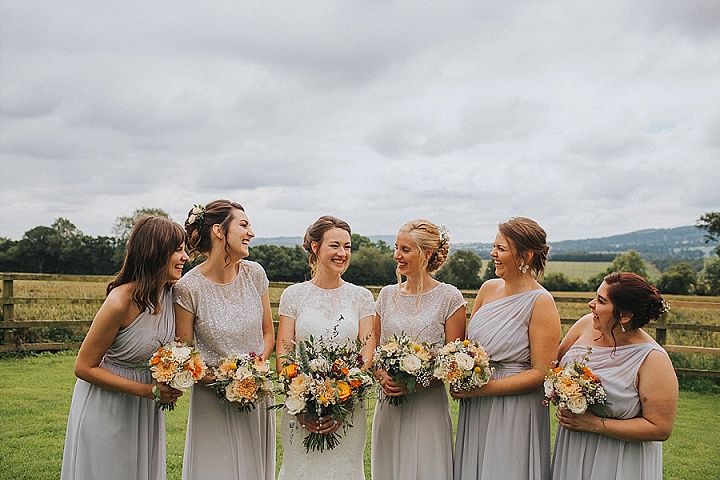 The bridesmaids were wearing silver and grey mismatching dresses and separates 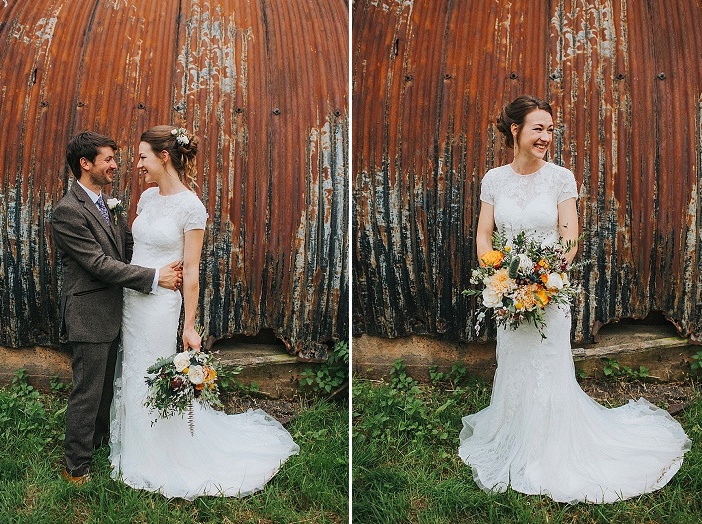 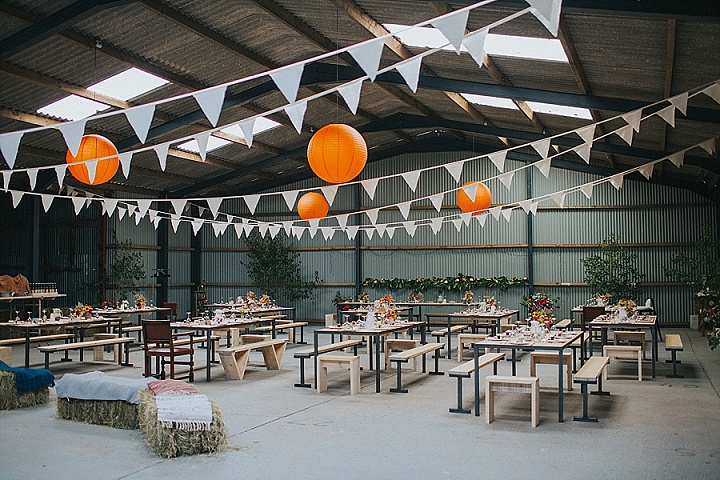 The venue was a barn completely decorated by the couple and the bride's family, there was hay, paper buntings and lanterns and bright blooms 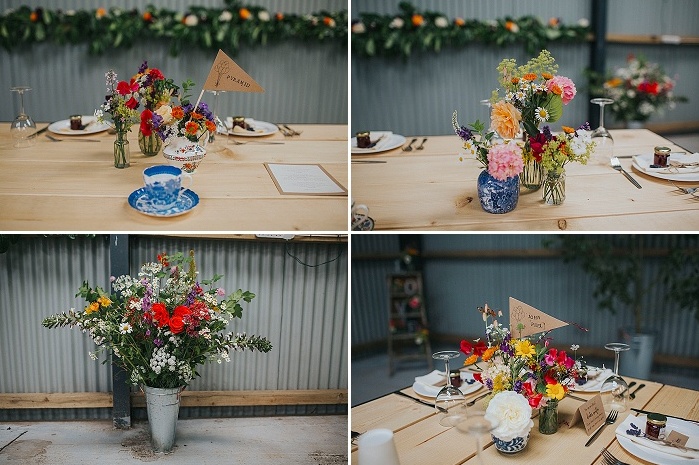 The tables were decorated simply, with bright blooms and greenery and some paper flags 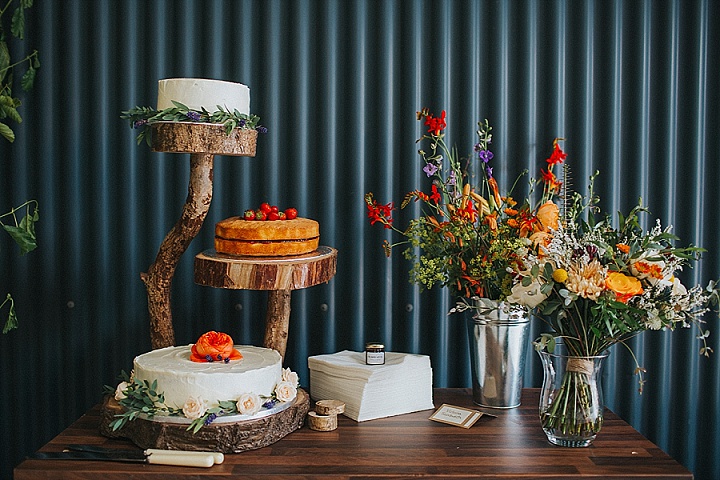