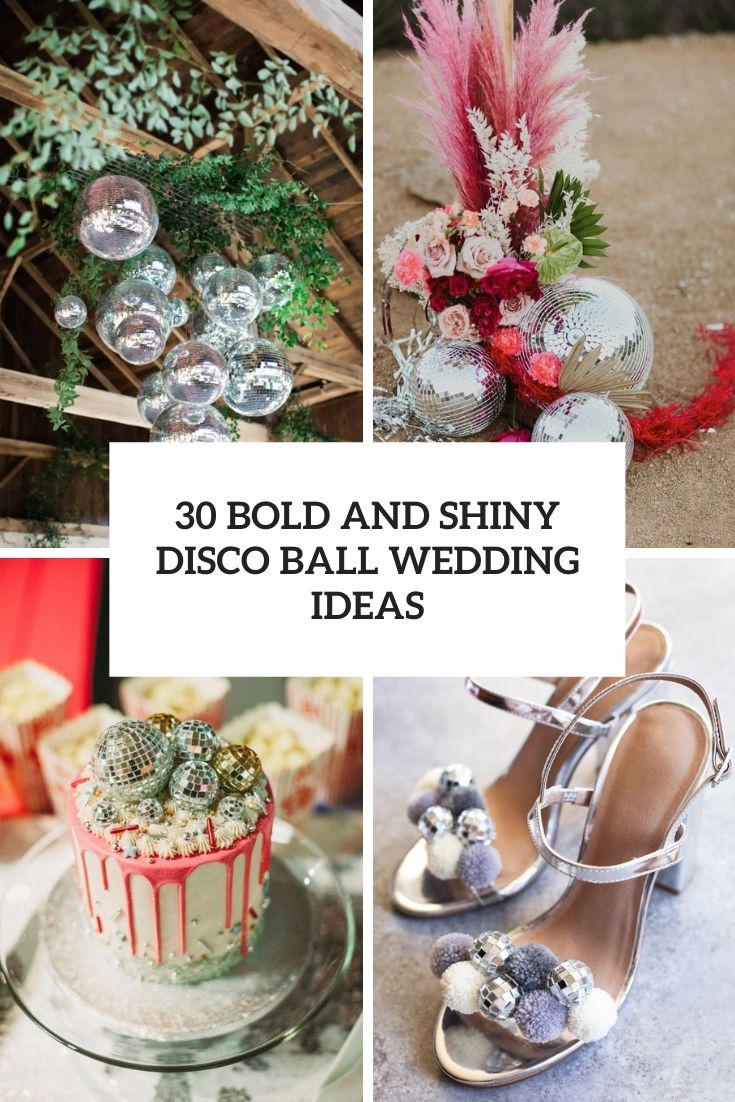 If you love parties, If you enjoy glam, if you want everyone to enjoy party fun at the wedding, you won’t be able to do without disco balls! Disco balls aren’t exactly a new concept—from Studio 54 to Saturday Night Fever, the disco ball has been used as an iconic centerpiece to parties not just since the age of disco, but actually since the 1920’s! Their popularity hasn’t waned over the decades, and there are many ways to incorporate them into your decor.

No longer just for the center of the dance floor, disco balls are being used for everything from large-scale overhead installations to aisle markers and much more. Disco balls take any party up a notch so you may want to jump on this décor trend for your wedding reception or ceremony, they can serve as vases and as bold touches to any kinds of decorations. Not sure you want to go full-on disco ball crazy, but still want to incorporate them into your wedding design? Try going with smaller touches, like mini disco ball escort cards, or even printed on a graphic invitation suite to give guests a hint at how fun your wedding will be. Disco balls are synonymous with a good time, and that’s exactly what your wedding should be. 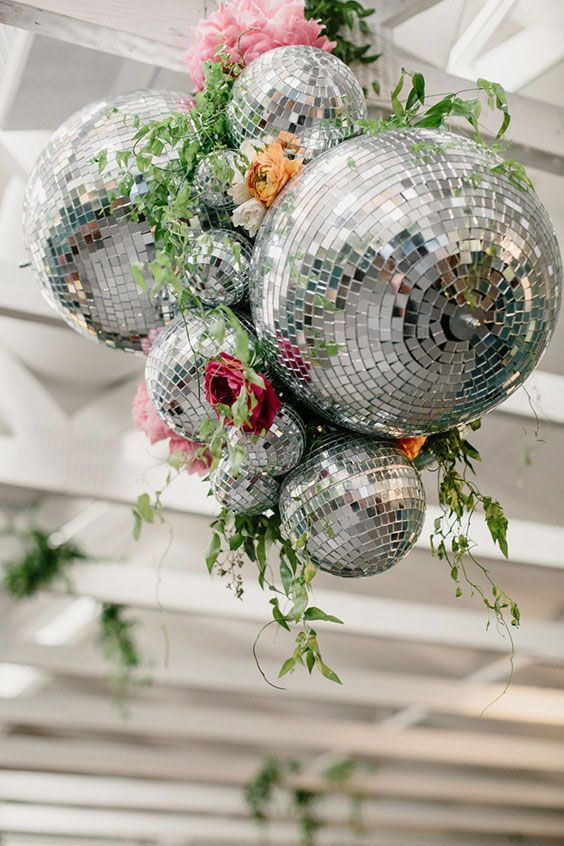 a bold wedding decoration of disco balls, bright blooms and greenery is a stylish and cool idea to rock 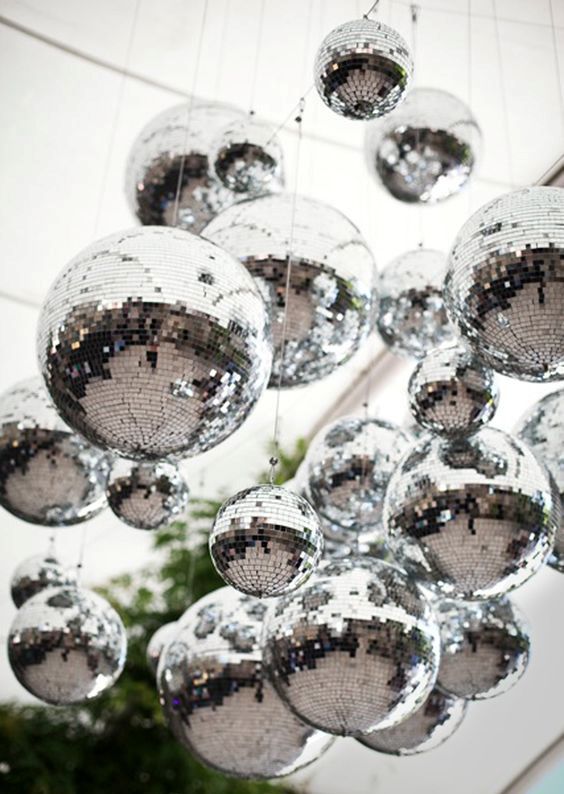 a disco ball chandelier like this one will be a nice installation over the dance floor, it will create a proper mood 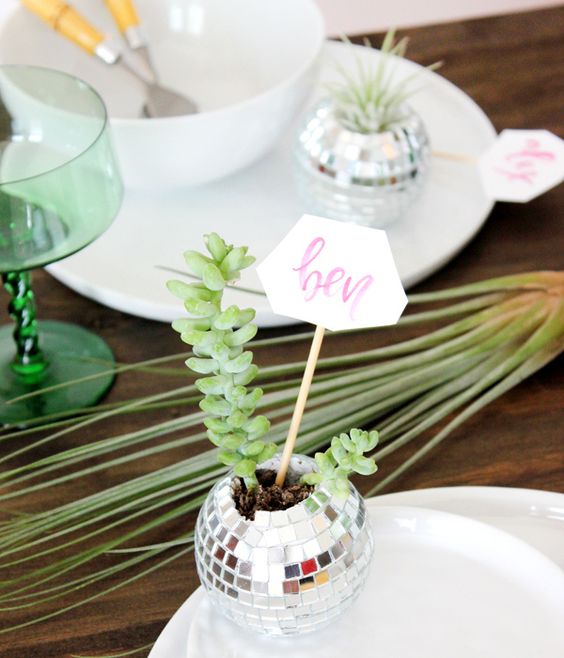 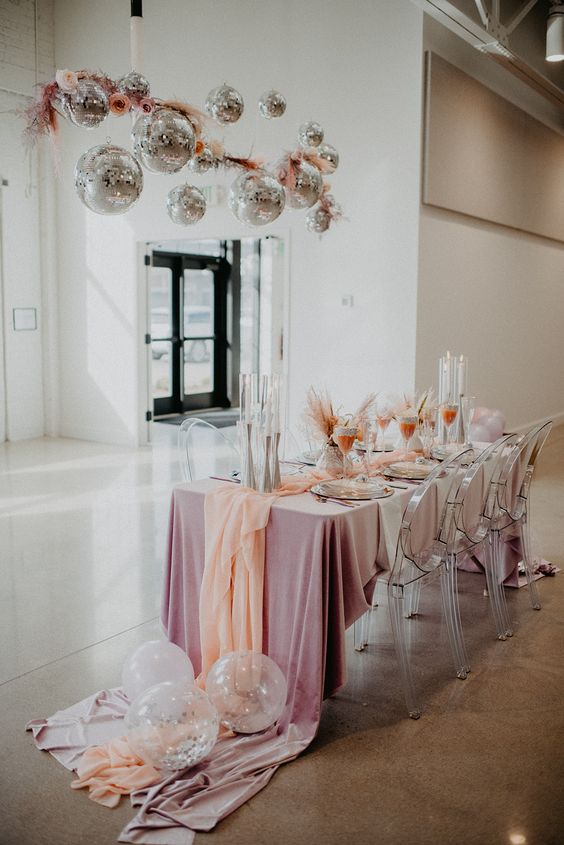 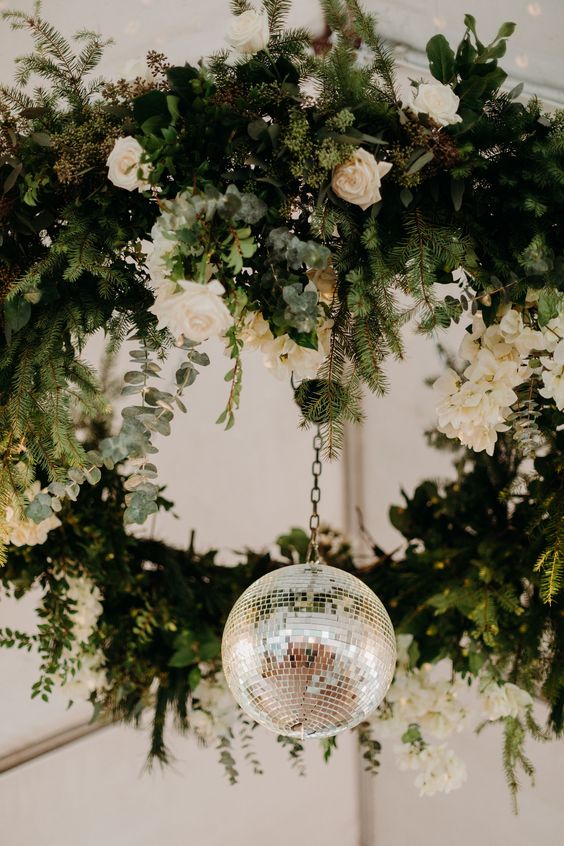 a greenery, fir, white rose wedding chandelier with a hanging disco ball is a unique idea for wedding decor 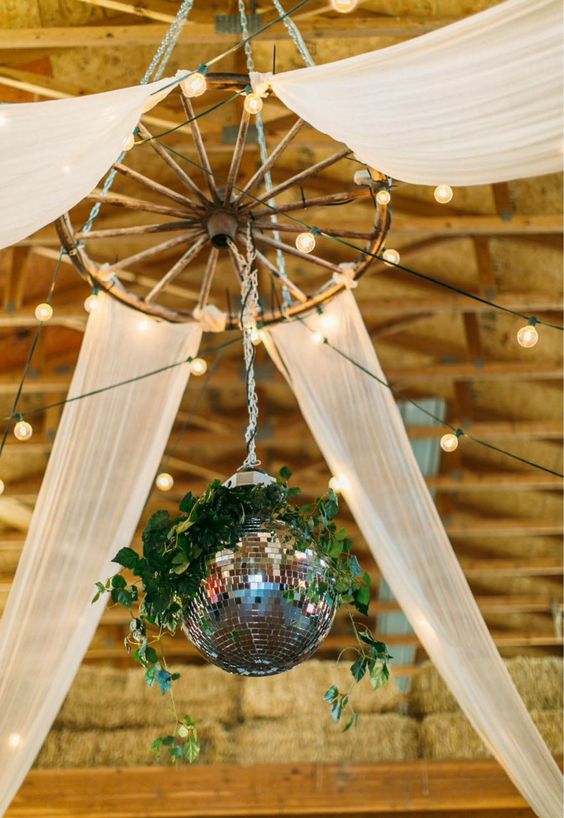 a rustic wedding chandelier of an old wheel, lights, some sheer fabric and a disco ball decorated with greenery 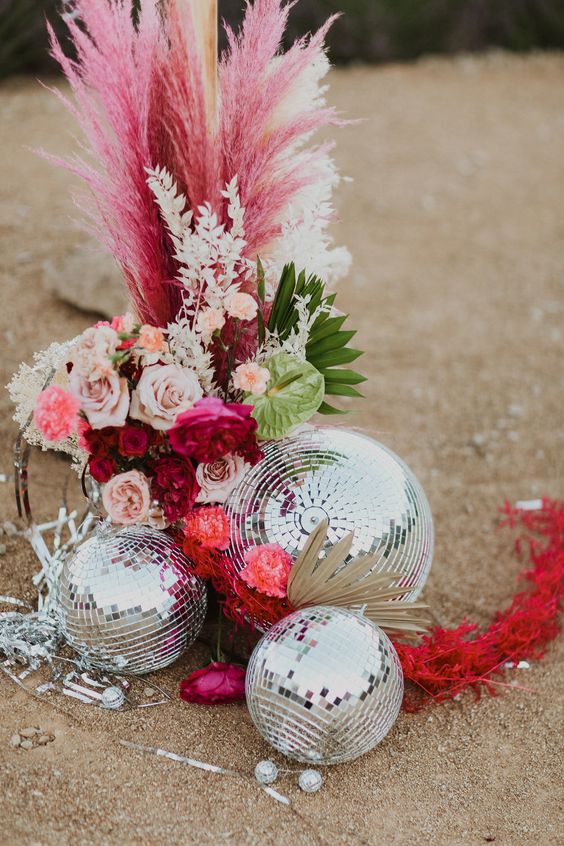 a super bold wedding arrangement of blush and bold blooms, pampas grass, greenery and disco balls by it looks wow 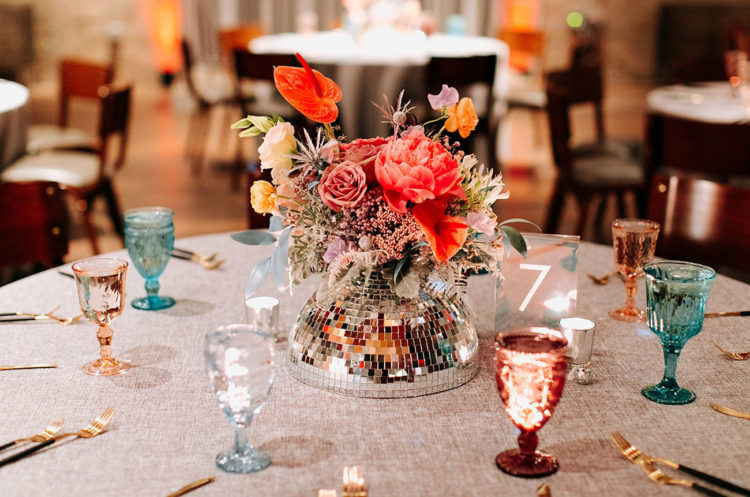 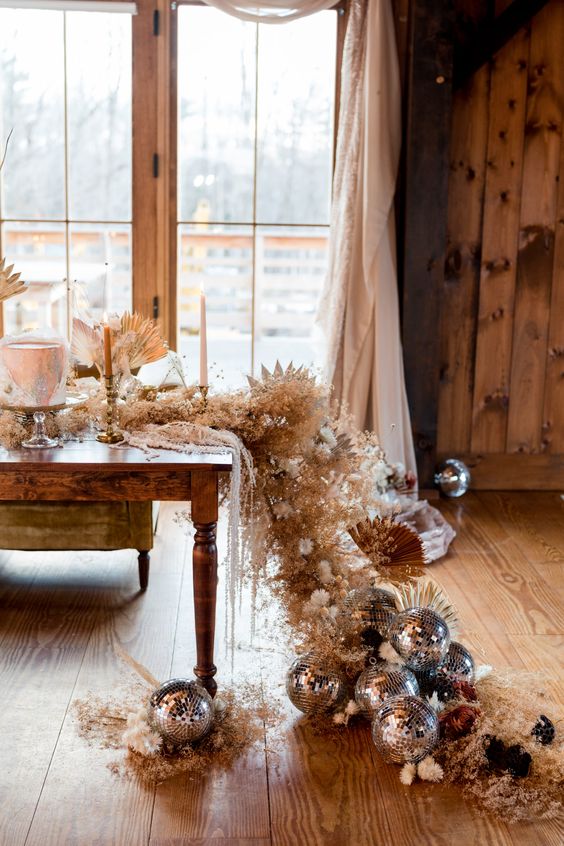 a unique wedding table runner going to the floor with dried herbs, blooms, leaves, fronds and some disco balls 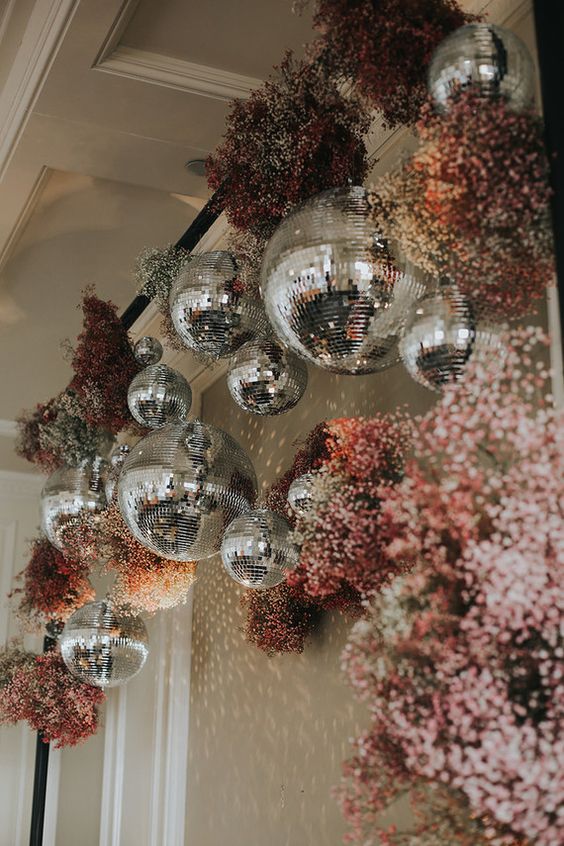 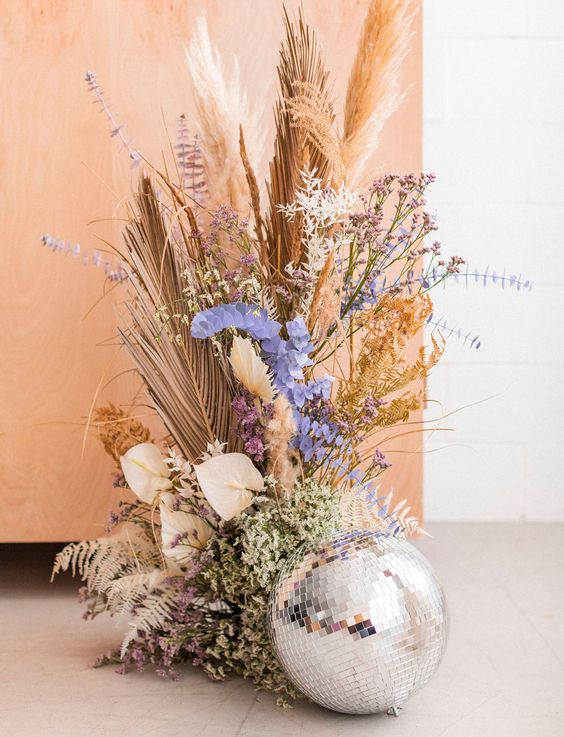 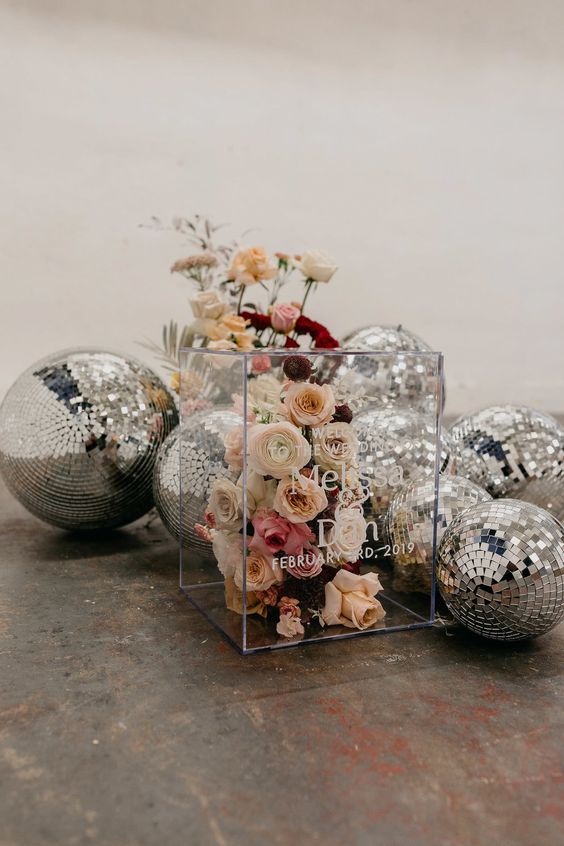 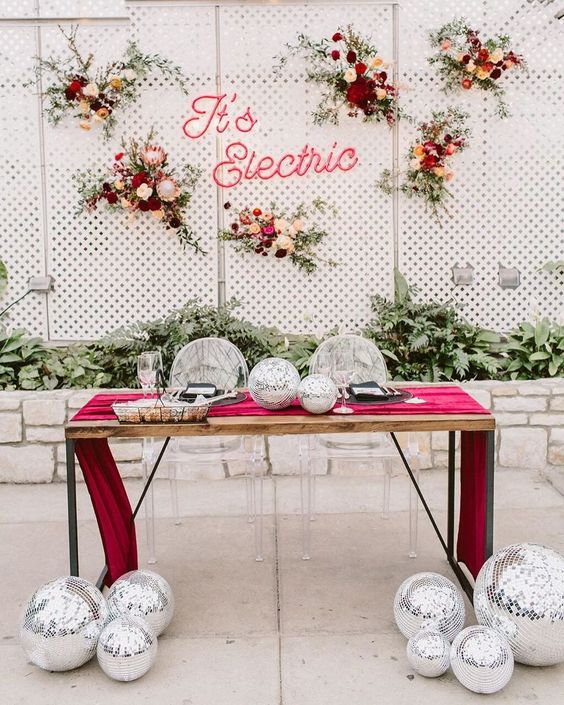 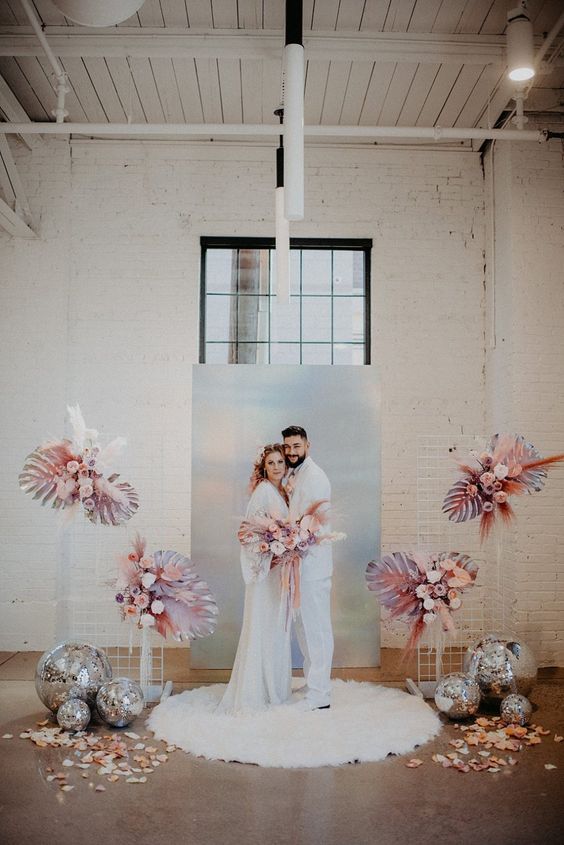 an iridescent backdrop, pastel blooms and leaves, a faux fur rug and disco balls for a one-of-a-kind wedding ceremony space 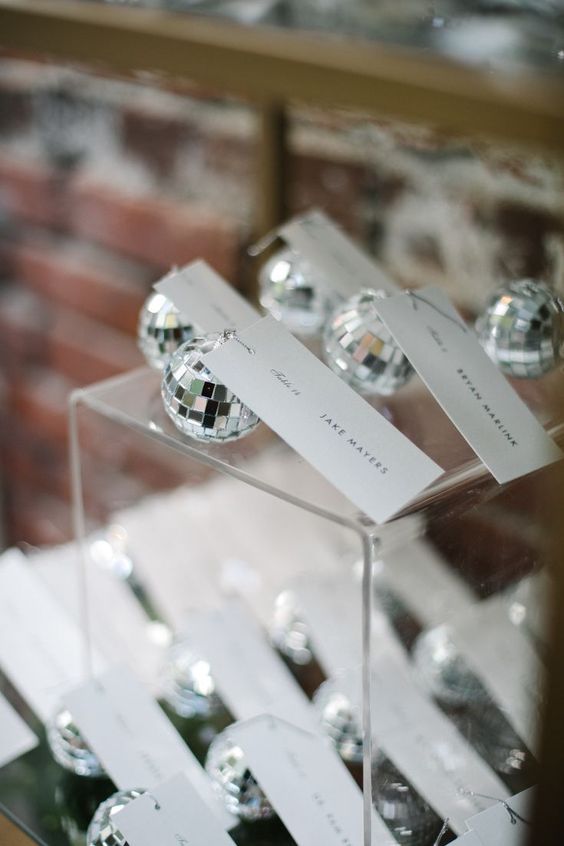 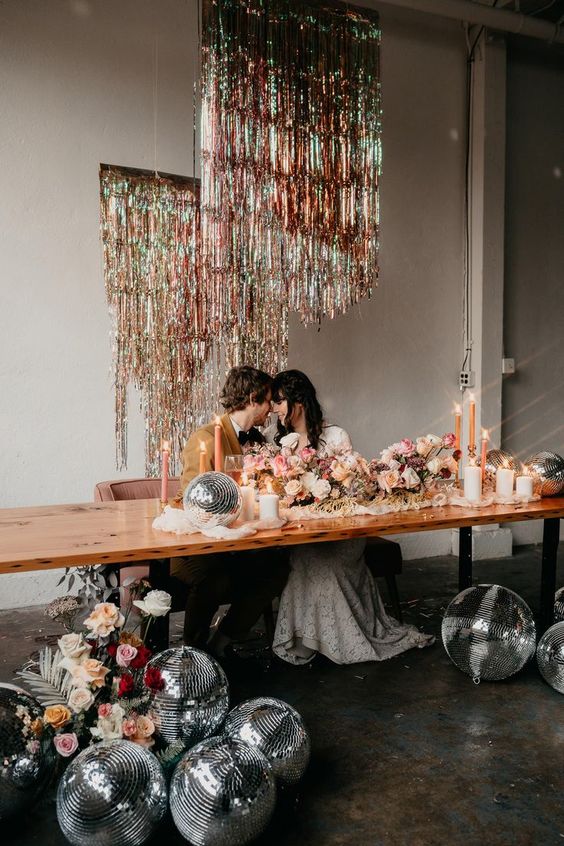 place some disco balls at the table and hang some shiny fringe over it to make it look glam, bold and fun 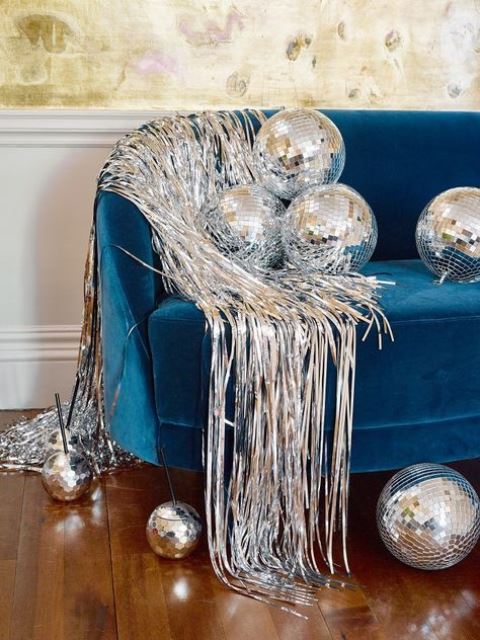 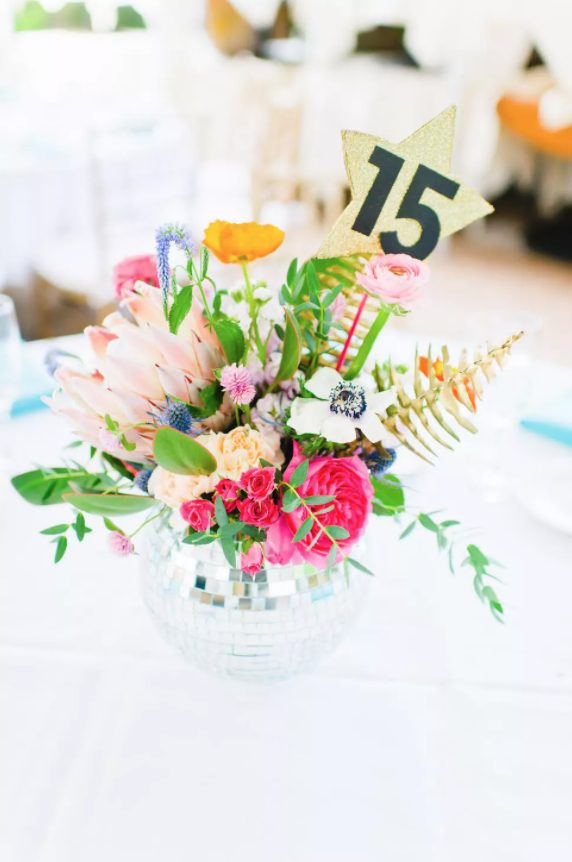 a bold wedding centerpiece of a disco ball as a vase, greenery, bright blooms and a gold sparkle table number 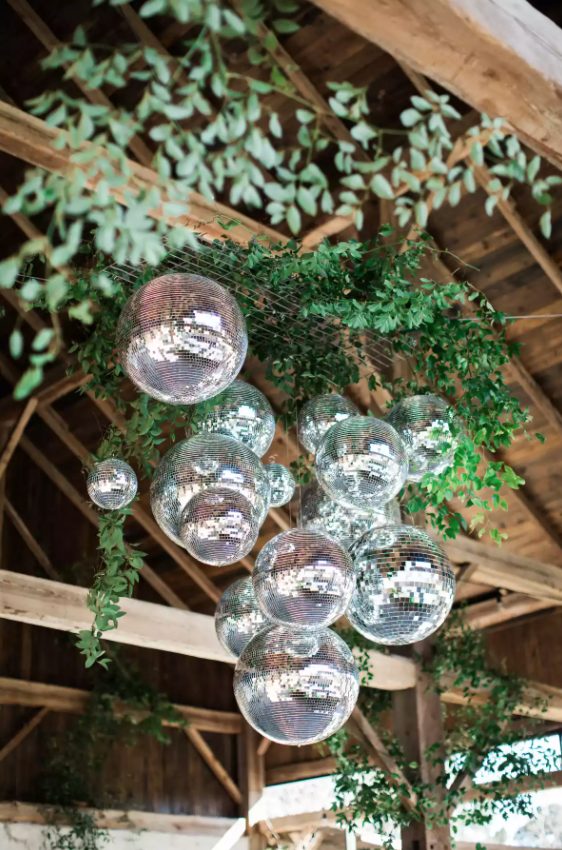 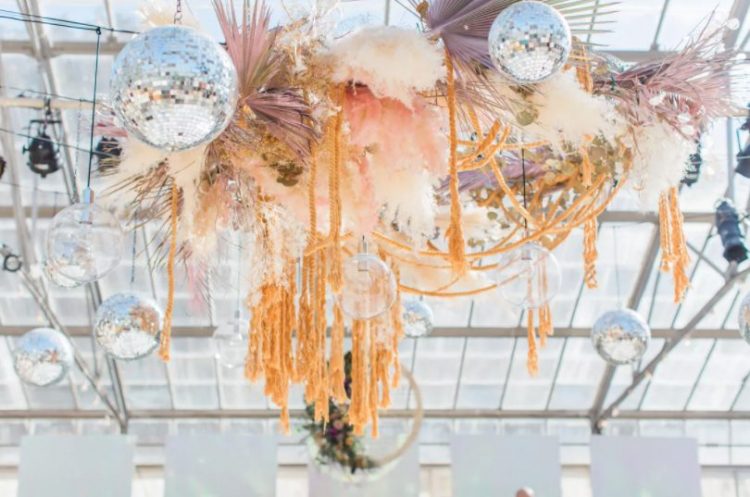 a wedding arrangement of dried fronds and leaves, pampas grass, feathers, yarn and disco balls for a unique look 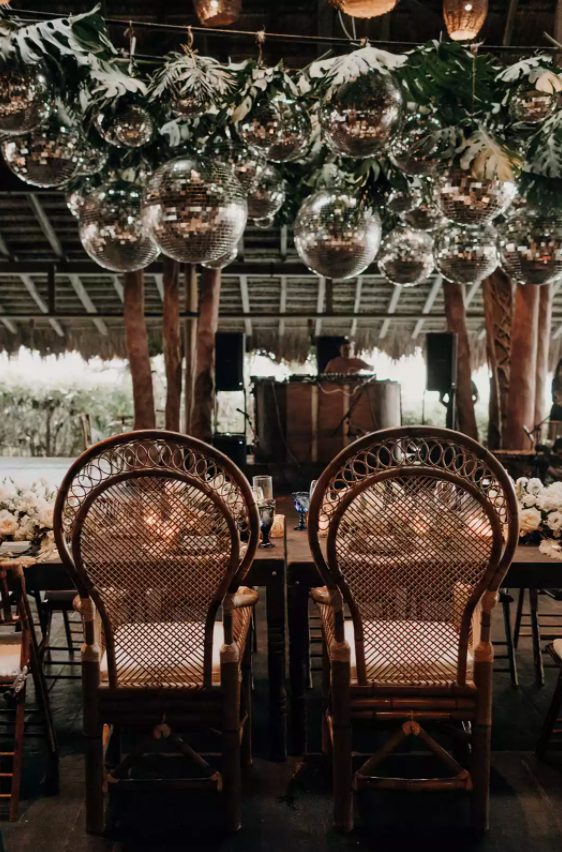 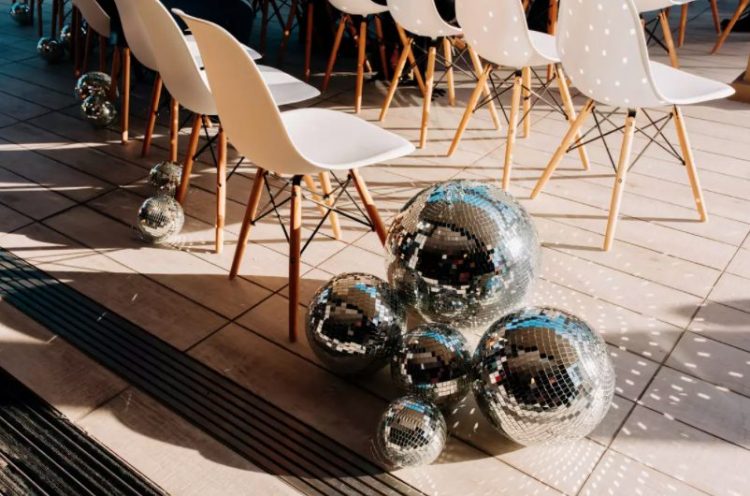 You may also accent your food and drinks with disco balls that can be used as punch bowls, as wedding cake or cupcake toppers, as wedding drink stirrers – such projects are easy to realize yourself! 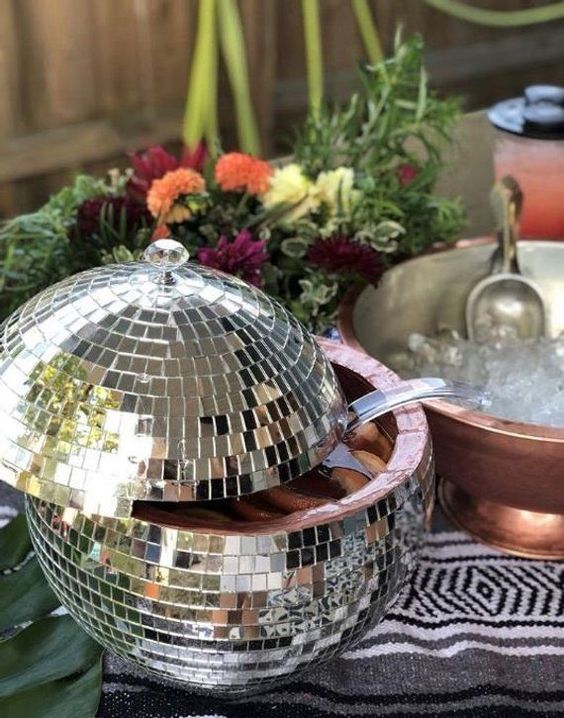 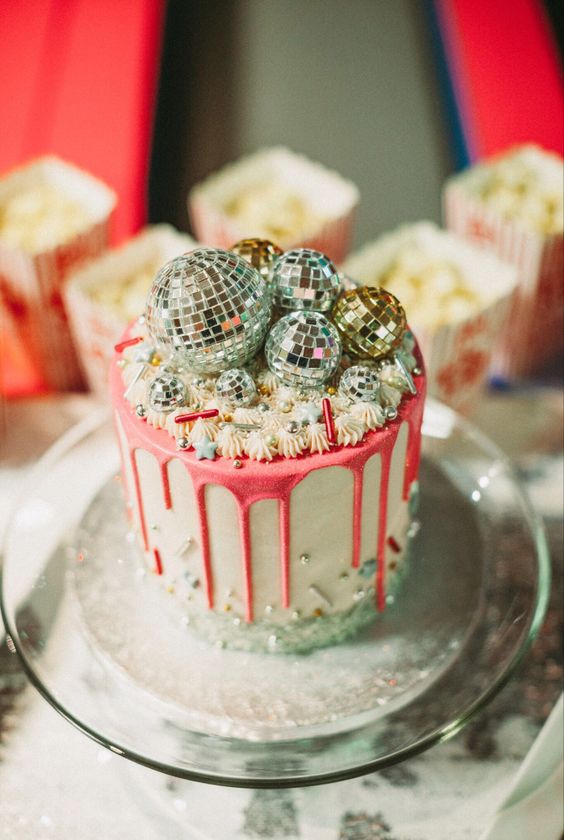 a party-themed wedding cake with pink drip, sparkles, beads and disco balls on top is a very bright idea 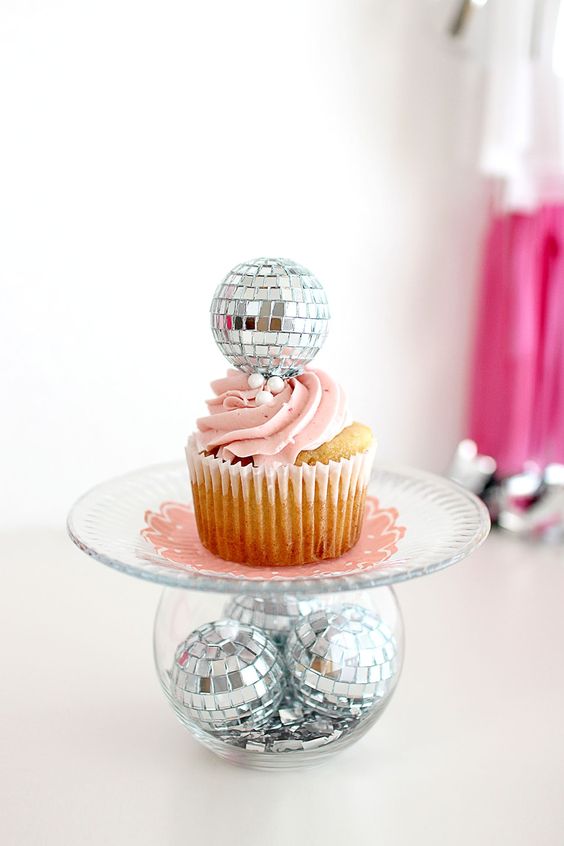 a stand of a bowl with disco balls, a sheer plate and a cupcake topped with a disco ball for a party feel 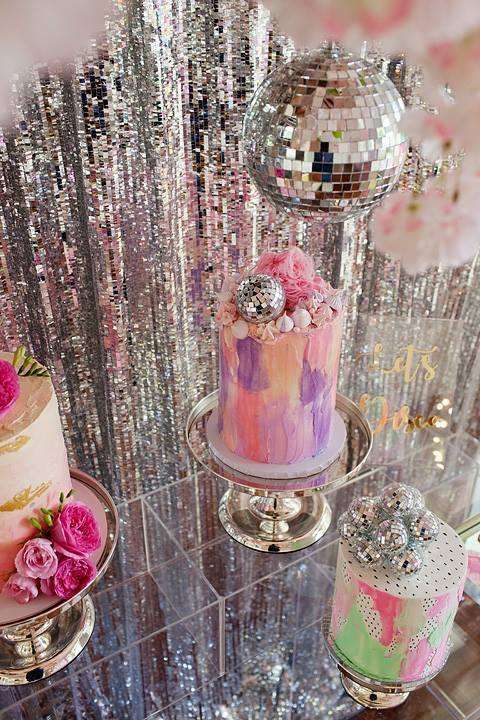 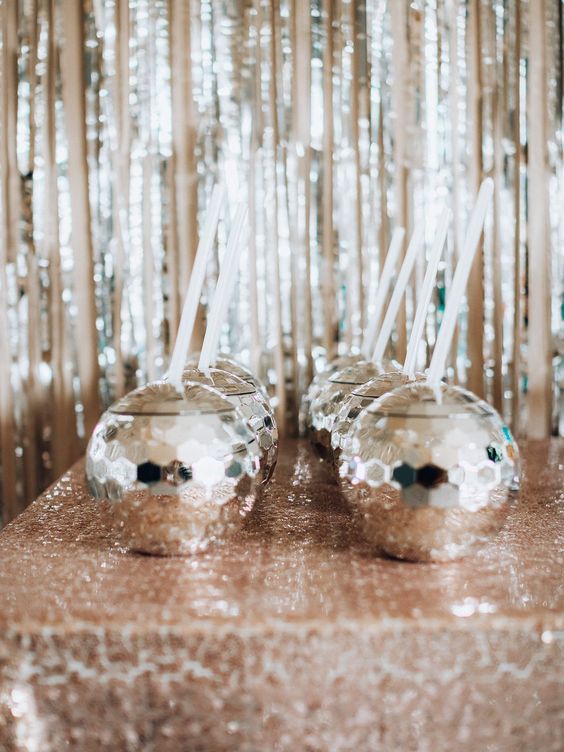 disco drinks served in disco balls are a very creative and very fun idea to rock, they will add glam to the party 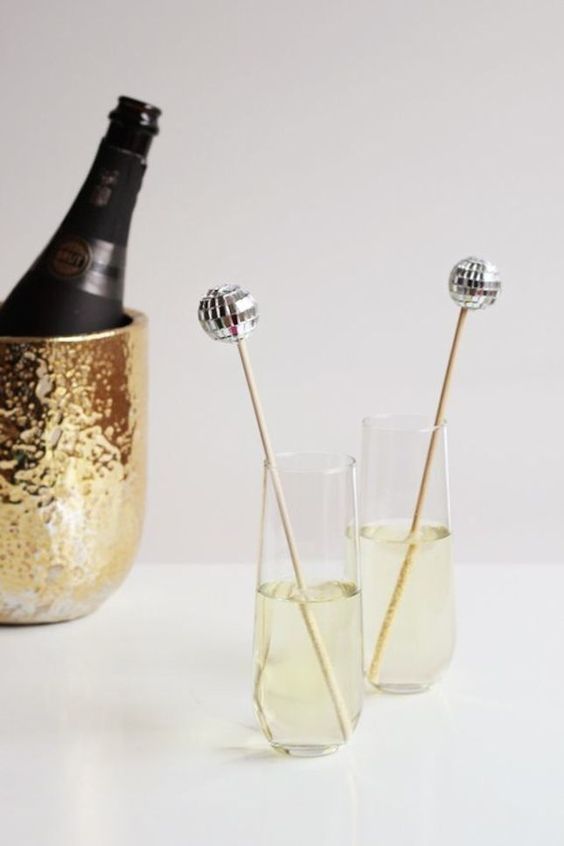 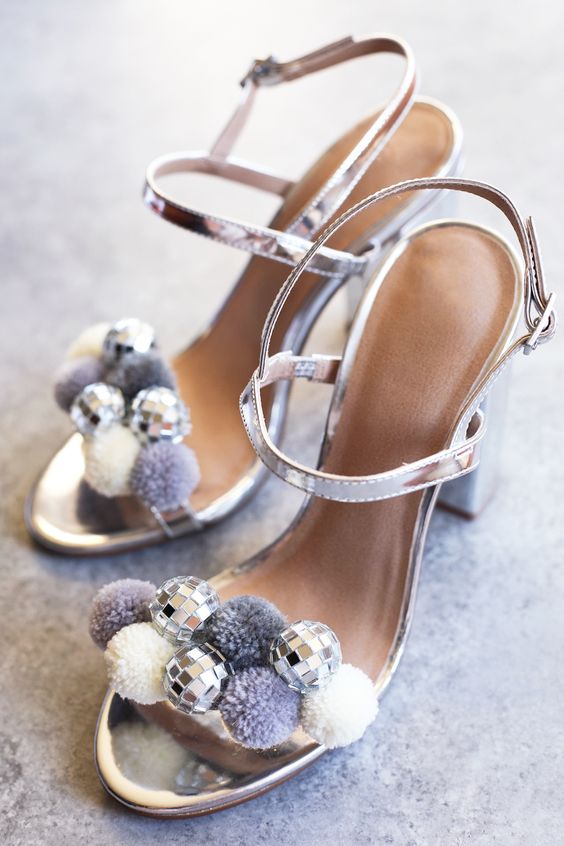